IN CELEBRATION OF THE BLACK-AND-WHITE PRINT

To many, including some close photographer friends, Black-and-White is the very definition of photography.  John Sexton is an iconic master of the Black-and-White photography art.  John was born in 1953, and has lived on the Monterey Peninsula in California for more than thirty years. Respected as a photographer, master printmaker, author, and workshop instructor, he is best known for his luminous, quiet, black and white photographs of the natural environment.

About Epson’s An Interview with John Sexton

Watch one of the most respected Black-and-White photographers talk about his start in photography, working with Ansel Adams and
his amazing body of work produced with traditional Black-and-White film, chemistry and paper.

Many thanks to Epson for producing this excellent instructional material. 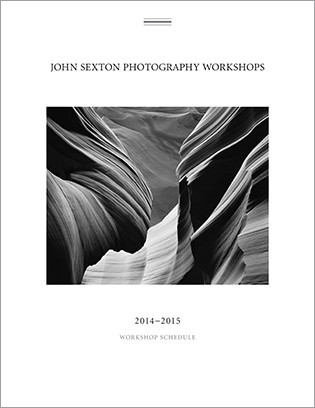 For the last 40 or so years, John Sexton and his photographer friends have given a series of  Black-and-White workshops held in locations around the world.  These workshops ALWAYS full up, and usually shortly after their announcement.  For the Black-and-White large format film photographer, John’s workshops are widely considered in the industry to be truly the “Masters Classes.”  John has just released his workshop calendar for the 2014-2015 workshop season.  I’ve linked to the PDF of the Complete workshop brochure for those who wish to. Download it here now.