It is hard to believe, but the July 4th holiday is upon us here in the United States. Officially a celebration of America’s independence from Great Britain’s monarchy, today this holiday has come to represent hot dogs barbecued on an outdoor girl, kids screaming in the swimming pool, and the traditional evening fireworks display. For the children, this is usually one of the most memorable days of the year. For a photographer, unless taking proper precautions and making the right adjustments, shooting fireworks can prove to be a nightmare. We’re talking mental adjustments as well as physical camera settings. 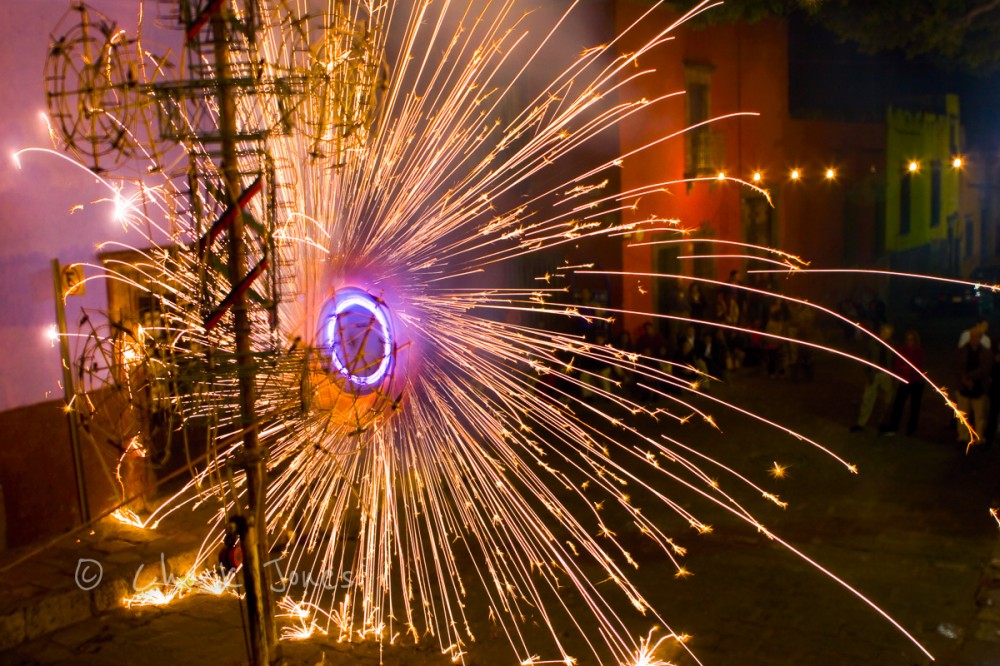 The actual capture process for shooting fireworks at first may seem a bit counter intuitive. Change your approach from treating light as illumination to treating it as your subject; Not light as an adjective, light as a noun. Not shooting with light, shooting light. Shooting fireworks is almost always a night shot, as they typically will not begin until long after sunset, when the night sky gives the most contrast to their luminous streaks passing high overhead. Normally, for night shooting we photographers think in terms of wide open apertures and fast lenses to provide the highest amount of light.  Shooting fireworks, things are different. 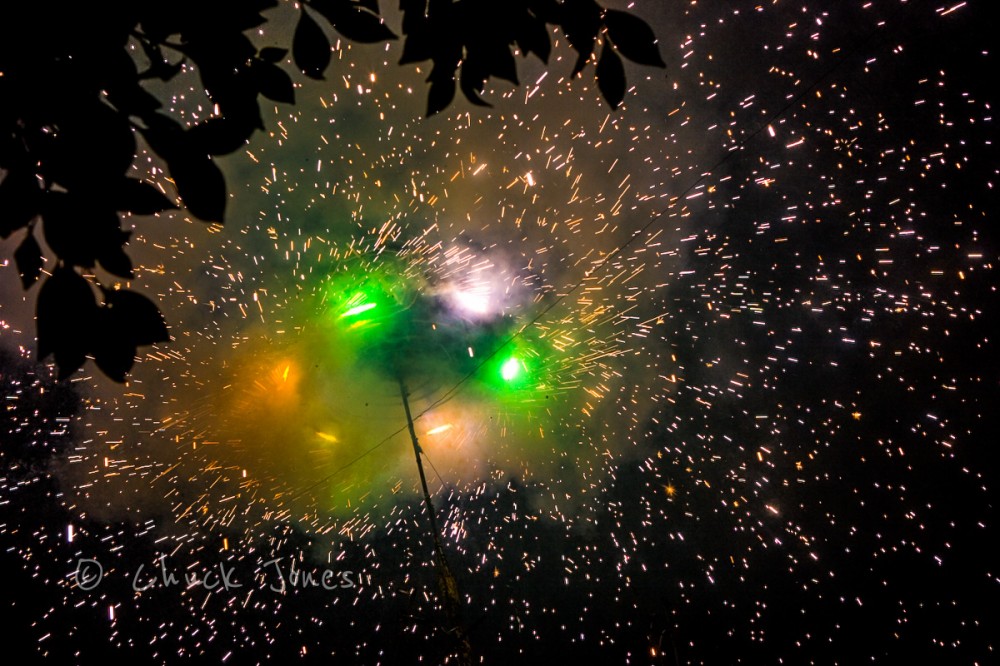 For shooting fireworks, we use a smaller aperture. Set the aperture in the f/5.6 to f/16 range. F/8 is usually a good bet, and where I start myself.  Set your ISO to 100 if possible.  Some of the more modern cameras only go down to ISO 200, as they are biased for shooting in low light. You do NOT want a low light performance high ISO star for shooting fireworks. You want just the opposite, you want less sensitivity. You want to “dumb it down” or desensitize. If forced to be  shooting with ISO 200 set, you may want to kick your f-stop  down to f/16 to start with. If you have a camera that won’t shoot down to ISO 200, find another one.  Higher ISO settings I do not find nearly as pleasing as those at ISO 100 or lower.

Shooting fireworks you have a very strong, high intensity light source from a subject that is self illuminating. The highlights will easily blow out if you aren’t careful. So the trick to shooting fireworks is how you deal with your highlights. The dynamic range between your darkest part of a night time image and the fireworks highlights is going to be hug, far larger dynamic range than most common digital camera sensors can capture. At all costs, you want to protect your highlights.  Again, we need to adjust our mental thinking and expose to protect our highlights by setting a measured exposure down a third of a stop. You can always open up shadows, but a blown out highlight is gone for good. Forget “Expose To The Right” as it does not apply to shooting fireworks. To my eye, blown out highlights are not very pretty set against a dark night sky, but the beautiful colors they contain when tamed down take my breath away. 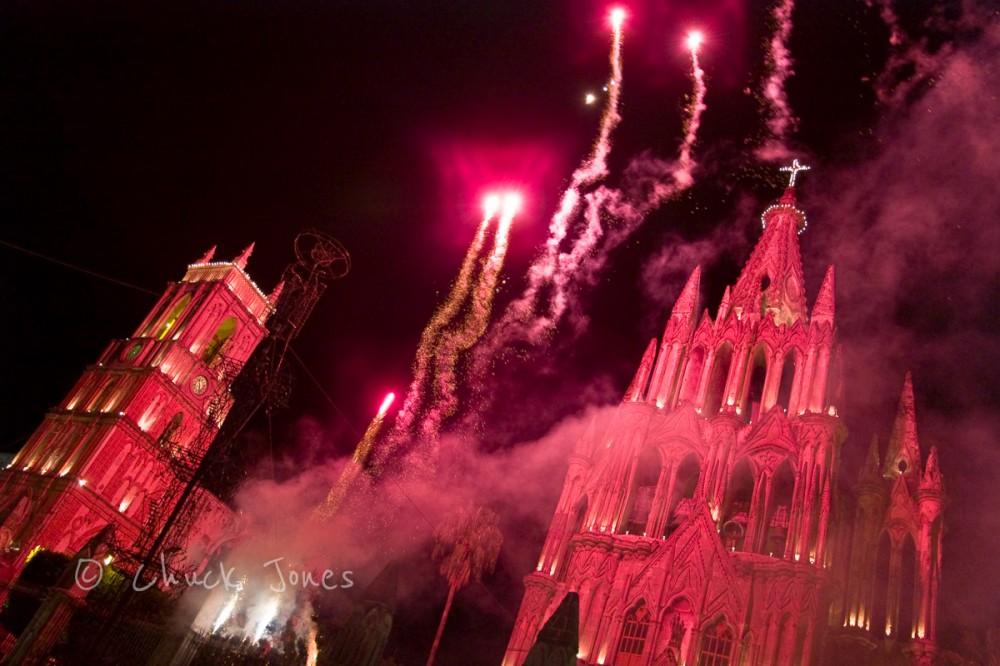 To capture the best effects from bursts, exposure times will usually be between about half a second and even up to four seconds in some cases but judge it as you see it at the time. Slower shutter speeds are required to show the “trails” of light the fireworks put off as they traverse the sky. Shooting fireworks, you sort of need to feel your way, judging your shutter speed and other camera settings from the rear image display on your camera. Obviously, it goes without saying that a good firm tripod is necessary, and your camera should be in full manual mode. If your lens has image stabilization, turn it off. Even good pictures of fireworks can be boring if there’s nothing to distinguish them. You can make more interesting photos by including buildings in the background or spectators in the foreground shooting fireworks. 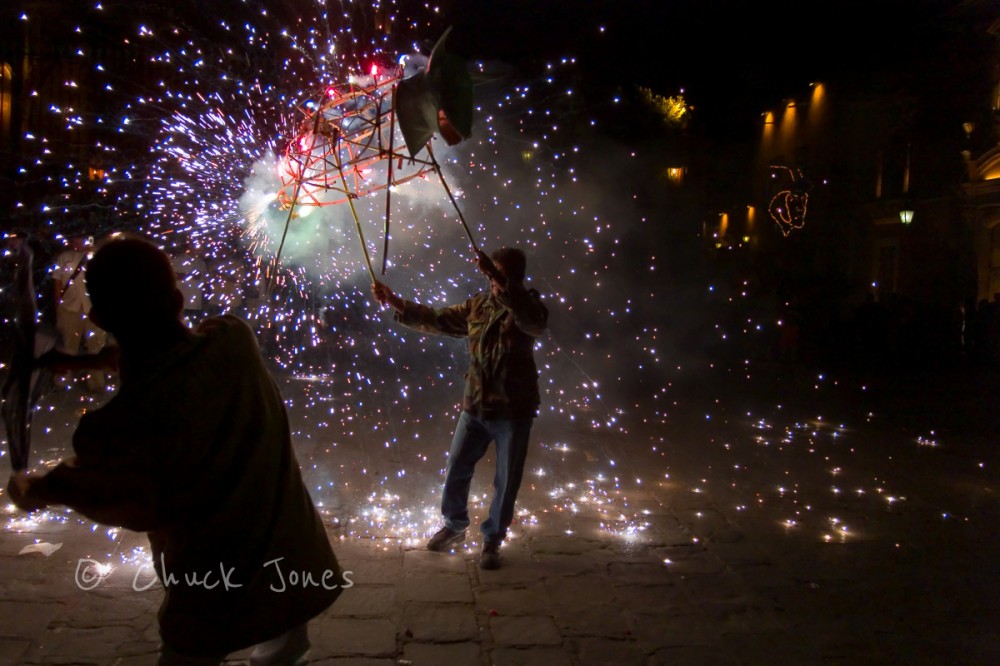 Wikipedia tells us Fireworks are a class of explosive pyrotechnic devices used for aesthetic, cultural, and religious purposes. A fireworks event (also called a fireworks show or pyrotechnics show) is a display of the effects produced by firework devices. Fireworks competitions are also regularly held at a number of places. Fireworks take many forms to produce the four primary effects: noise, light, smoke and floating materials (confetti for example.) They may be designed to burn with flames and sparks of many colors, typically red, orange, yellow, green, blue, purple, silver and gold. Displays are common throughout the world and are the focal point of many cultural and religious celebrations. 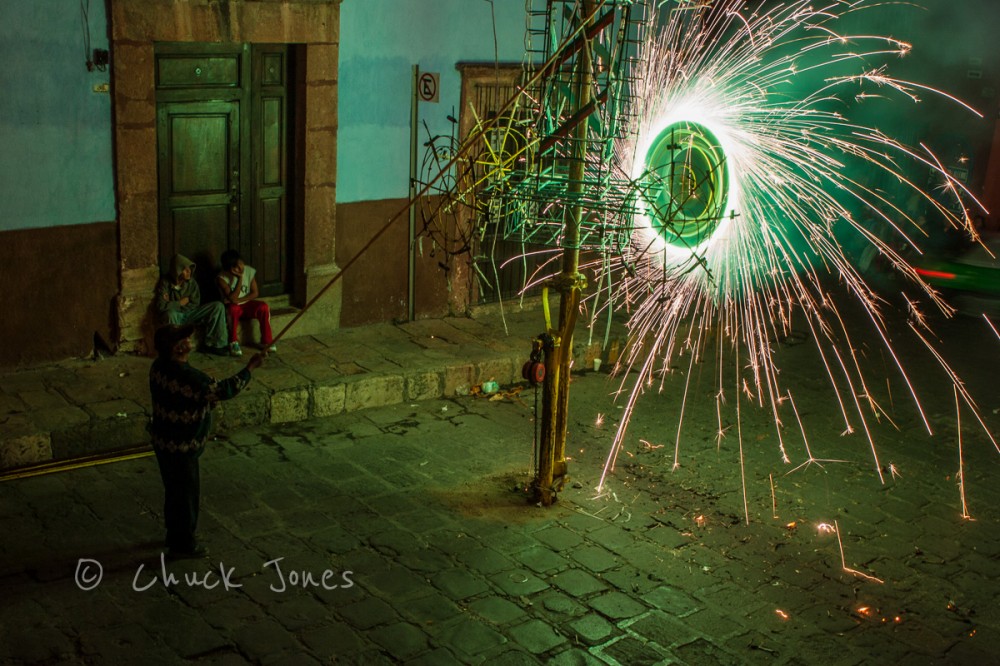 The earliest documentation of fireworks dates back to 7th century China, where they were invented. The fireworks were used to accompany many festivities. It is a part of the culture of China and had its origin there; eventually it spread to other cultures and societies. Important events and festivities such as the Spring Festival (Chinese New Year) and the Mid-Autumn Festival were and still are times when fireworks are guaranteed sights. China is the largest manufacturer and exporter of fireworks in the world. 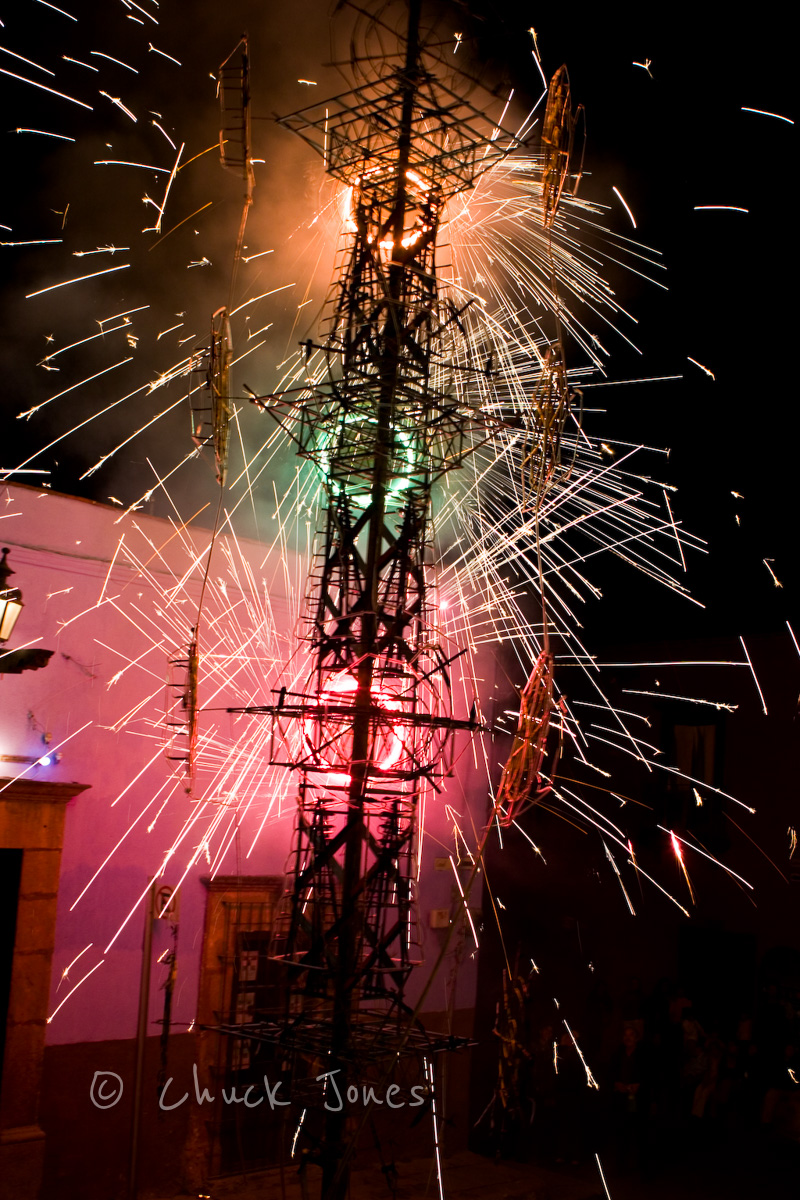 And as you can see from my photos here, Mexico isn’t far behind ;=) 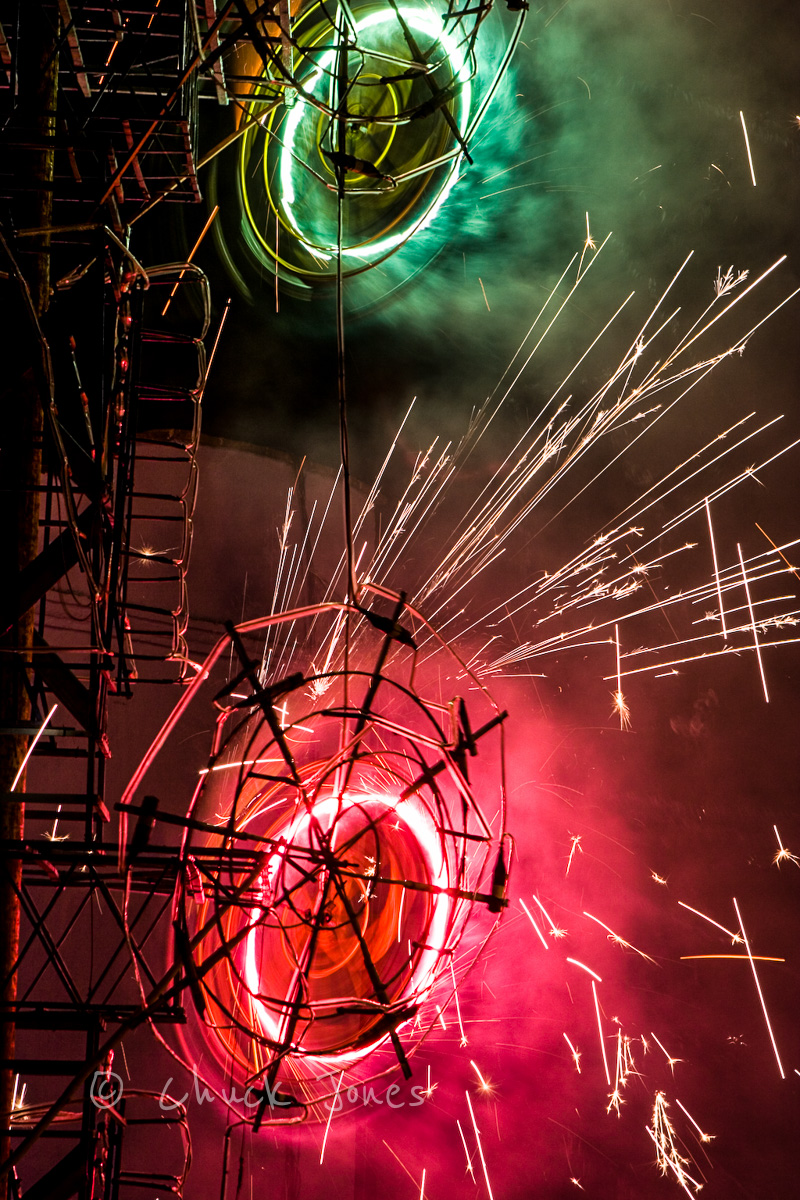 Thanks for sharing your time with me.

Warmest Regards, and Have A GREAT Forth of July Day!