One of the wonders living near Hollywood is the number of opportunities that come up to see first class, top drawer creative  works.  The real deal, too, works from the world’s top creative artists.  Much of it is surrounded by a lot of pomp and pageantry, and yes, much of that is quite pretentious.  It is, after all, Hollywood.  The scruffy little town with attitude, home to the largest corporate entertainment giants and much of the creative talent that keeps them there.

This year’s Paris Photo Los Angeles was held on Paramount Studio‘s back lot.  I’m told this is just the second year of a five year engagement of Paris Photo at the Lot. As locations go, it’s one of my favorites. I’ve never been to a boring event on the Paramount Lot, and this year’s Paris Photo was anything but boring.  The positive energy was everywhere, as were the heavy commercial interests associated with most high end art events in all locals today. 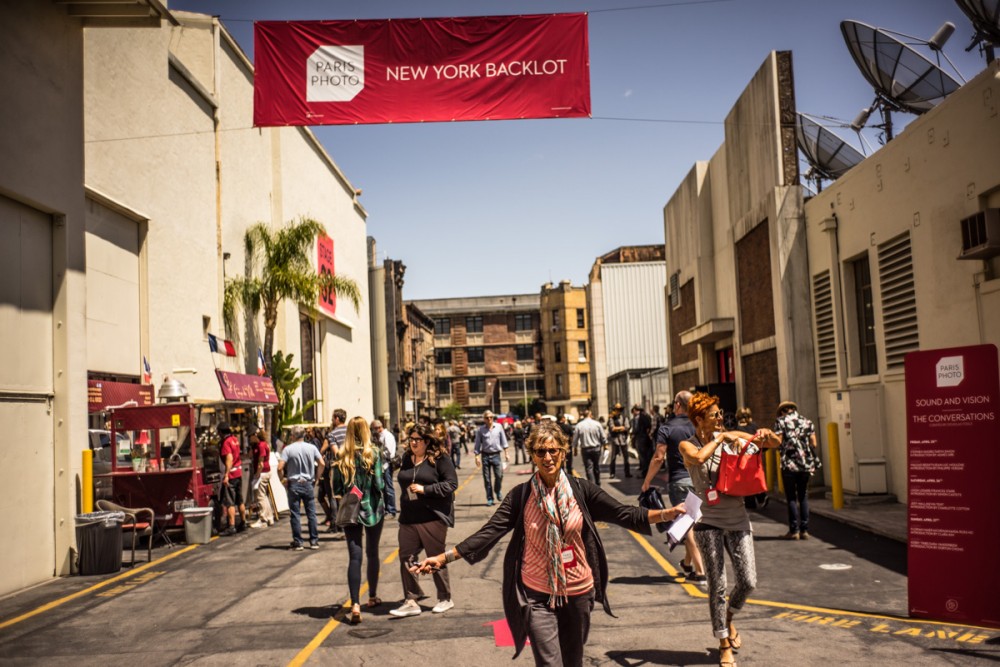 Patricia (Pat) Lanza, (above) Director of Talent and Content for the Annenberg Space For Photography flies through the backlot checking out this years wares.

Paris Photo Los Angeles is the US edition of one of the world’s most celebrated photographic arts fairs, a fair dedicated to the works created in the photographic medium.  Since Paris Photo incorporates and recognizes both the still as well as the motion media forms, the choice of Los Angeles, and in particular, the Paramount Studio’s lot is a brilliant one.  What a perfect site!  This year’s show took place last week, April 25th-27th.  Paris Photo is neither inexpensive ($28 at the door to get in) nor is it easily accessible (Even high priced paid parking can be several blocks away.)  This is not the show for the faint of heart nor for those who come as buyers shallow of pocket, as the work is some of the best in the world for sale with prices that do reflect that.

It was not unusual to see 8×10’s of minor celebrity going for an asking price of $2,500 and more. Some were so outrageous as to be simply outrageous for outrageousness sake, but I shall not name names for who am I to judge either the art or the prices? Platinum is expensive, but not that expensive, even at 30″ x 30.”  But that is one of the refreshing things I found about Paris Photo.  It was an event for everybody, with something to appeal to every taste, and a gourmet feast of it at all levels encompassing multiple large sound stages and the New York City backlot at Paramount.  (I do love new York city without its weather!) I can’t remember another photography show since Salgado’s Genesis that I felt like carrying so many works home for my own walls, if only in my dreams.

The people in attendance at Paris Photo were as wide a variety as the photographic works on the walls.  There were tons of photographers, so I felt in great company.  There were art buyers, art collectors, art reporters, art critics, art sellers, art framers, art transporters, and art advisors of many ilk and varieties.  Everybody was talking about photographic art.  An immersion into a sea of Photo-Phreaks like myself, and a most welcome dose of photo overload.  It was a colorful event,  a ton of fun for all participating, and quite an educational experience for some. 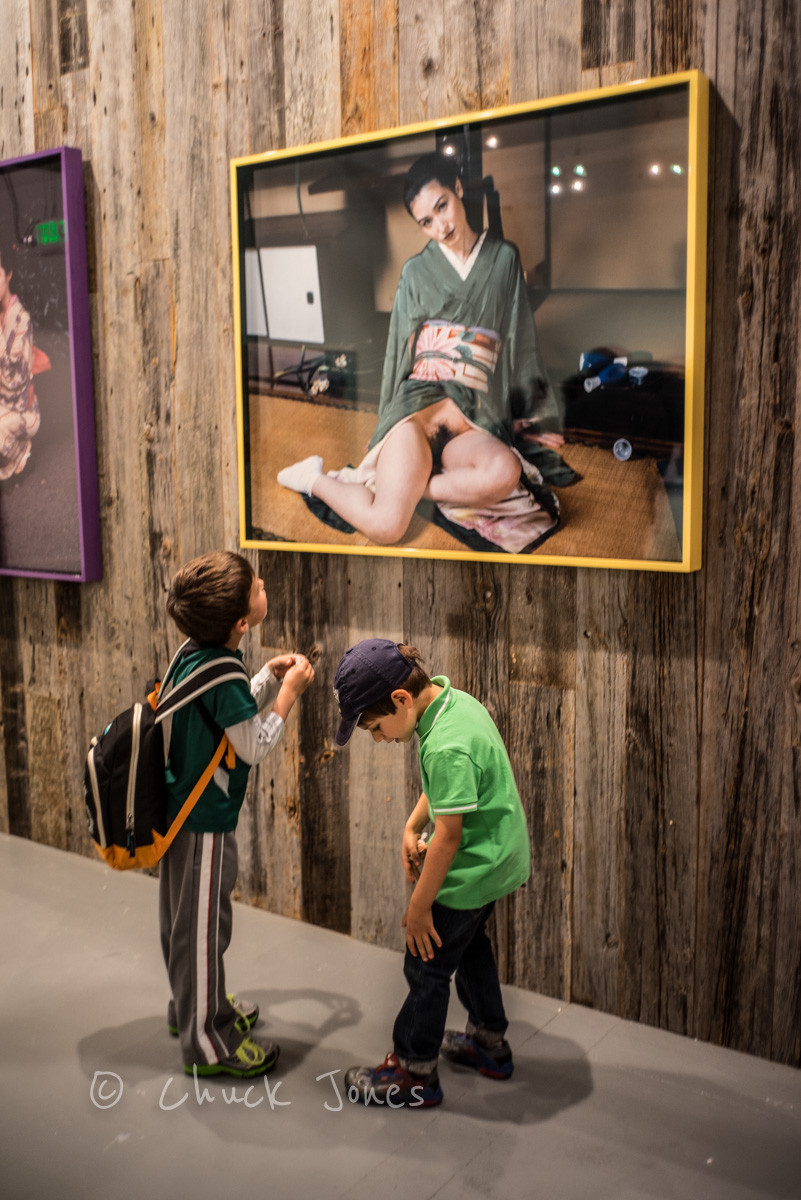 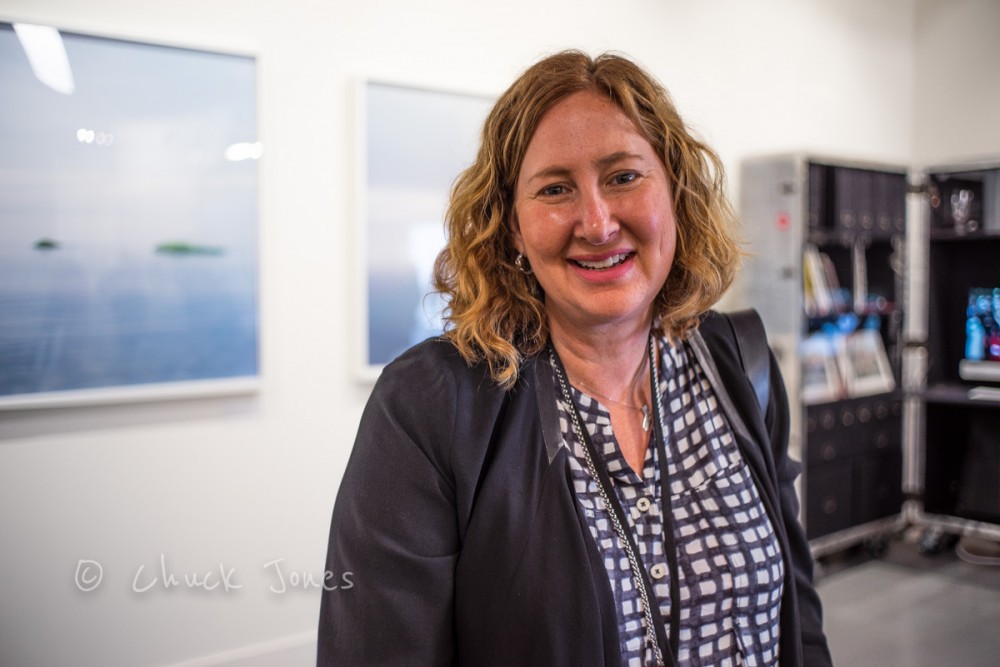 At the heart of the Los Angeles Leica 100 Years celebration is Annie Seaton, Gallery Manager of the Leica Gallery Los Angeles and her staff.  I asked Annie for her thoughts on Paris Photo, and also about their display, Leica 100 Years.  Here is what she had to say:

“I like to think of Paris Photo LA as an international celebration of Photography. That would include international art sales and commerce as a major component but also a tribute to the moving image, the LAPD archives, etc and book publishers and artist appearances made it so much more then just sales. We are so lucky that it came to Los Angeles! See Edward Goldman’s take on the fair..”
http://www.huffingtonpost.com/edward-goldman/paris-photo-la-lights-cam_b_3142571.html

Editors Note: *Edward Goldman is a well known Los Angeles art critic,  has a very good perspective on the whole scene and some valuable observations well worth reading. 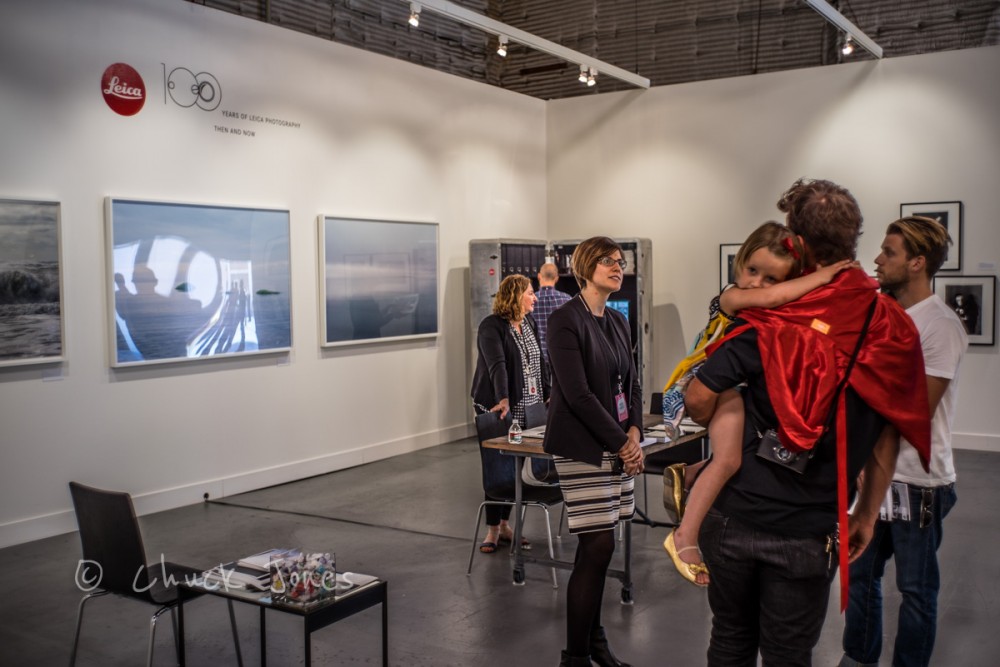 About their exhibit itself, Anne had this to say:

“Our exhibition (at Paris Photo) was inspired by our 100 Year anniversary of Leica cameras. The “Then” showcased master works from the Classic Leica Collection. This collection of vintage prints by HCB, Salgado, Manos, Evelyn-Atwood and Burri just to name a few, was unearthed in the Leica factory in Solms, Germany recently when the company was making early preparations to move factories to our new home in Wetzlar this May. It is a permanent Leica collection that will travel and made it’s recent debut last Fall at the opening of our Singapore Gallery at the Raffles Hotel. We are the second Gallery to exhibit the prints.”
“The “Now” portion of the exhibit are all medium format images by East Coast photographer EJ Camp. We exhibited EJ’s SEA last January and I have always known I wanted to share them with the Paris Photo LA community since I first saw her fantastic Seascapes. EJ uses our Medium format S Camera system.”
“So we had vintage silver prints from Cartier – Bresson who used early Leica analog cameras to EJ Camp’s digital medium format pigment prints.”

A beautiful exhibition it is to see, an exhibit well worth your time to see in person when and if it comes to a city near you.  This is all work from these masters I have never seen displayed in public before.
Where Anne had to travel across town to show work at Paris Photo Los Angeles, many traveled from halfway around the world to take-up temporary exhibition space on one of the sound stages or the even more creative spaces, inside one of the fake brownstone NYC backlot shops.  Very cool. 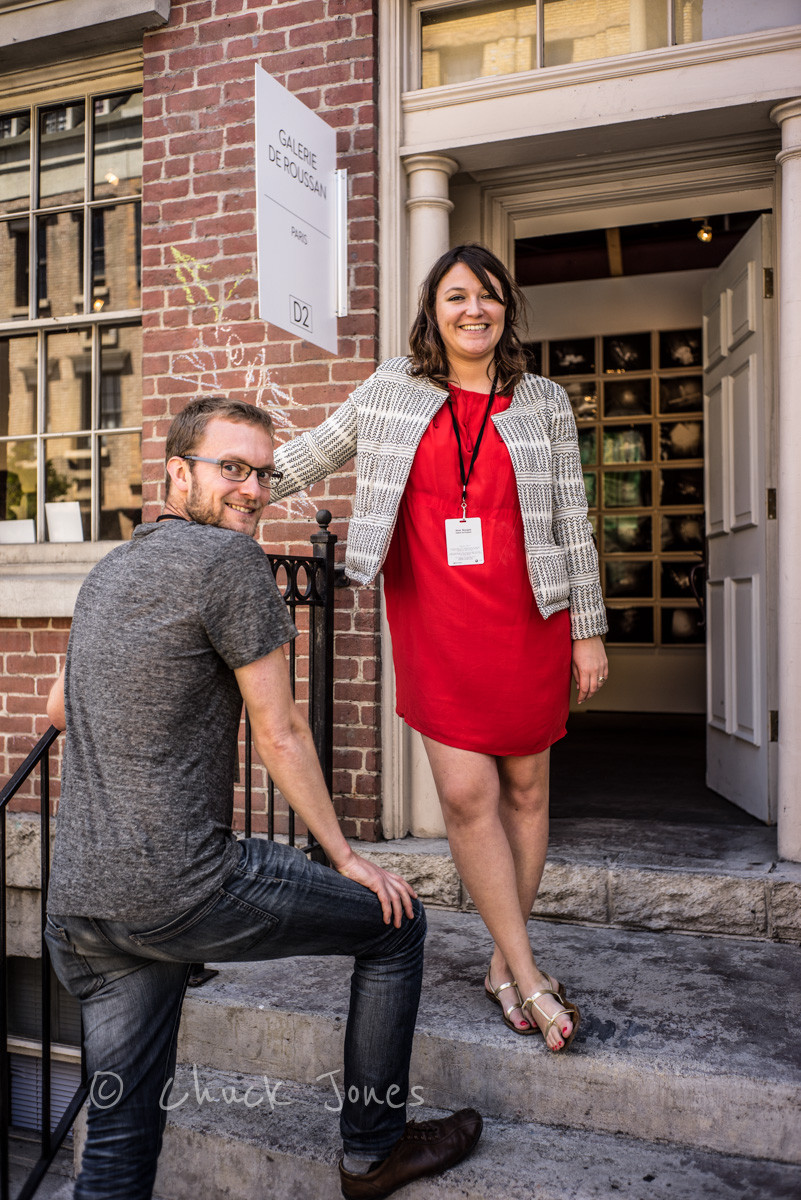 Food was provided by gourmet traveling food trucks, or “Roach Coaches” as they are fondly referred to by those of us forced to partake far too often.  Food was also available at the world famous “Spotlight Diner” on the NYC set. 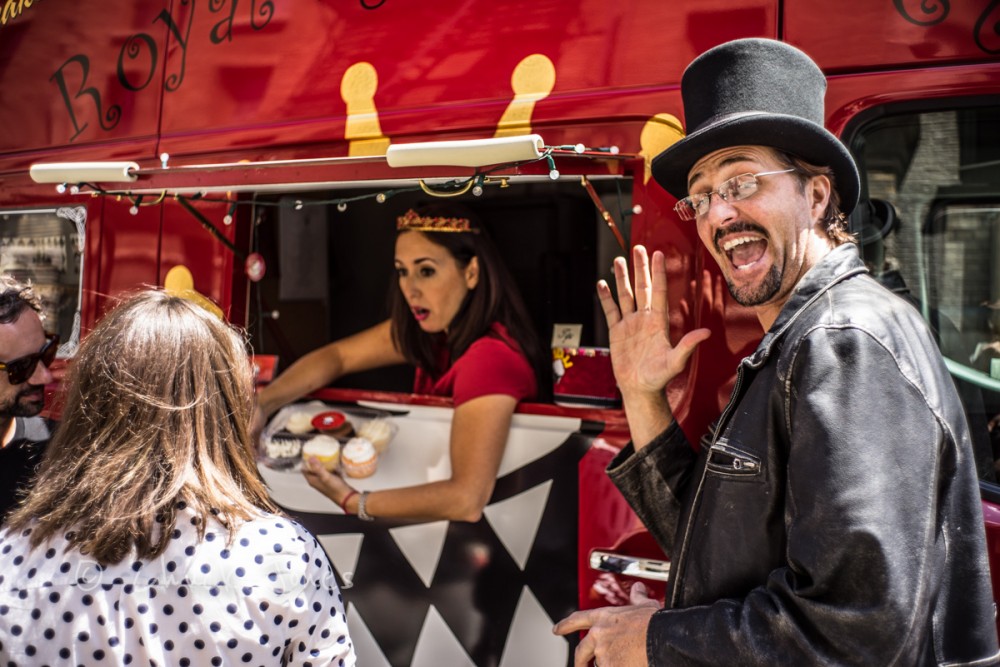 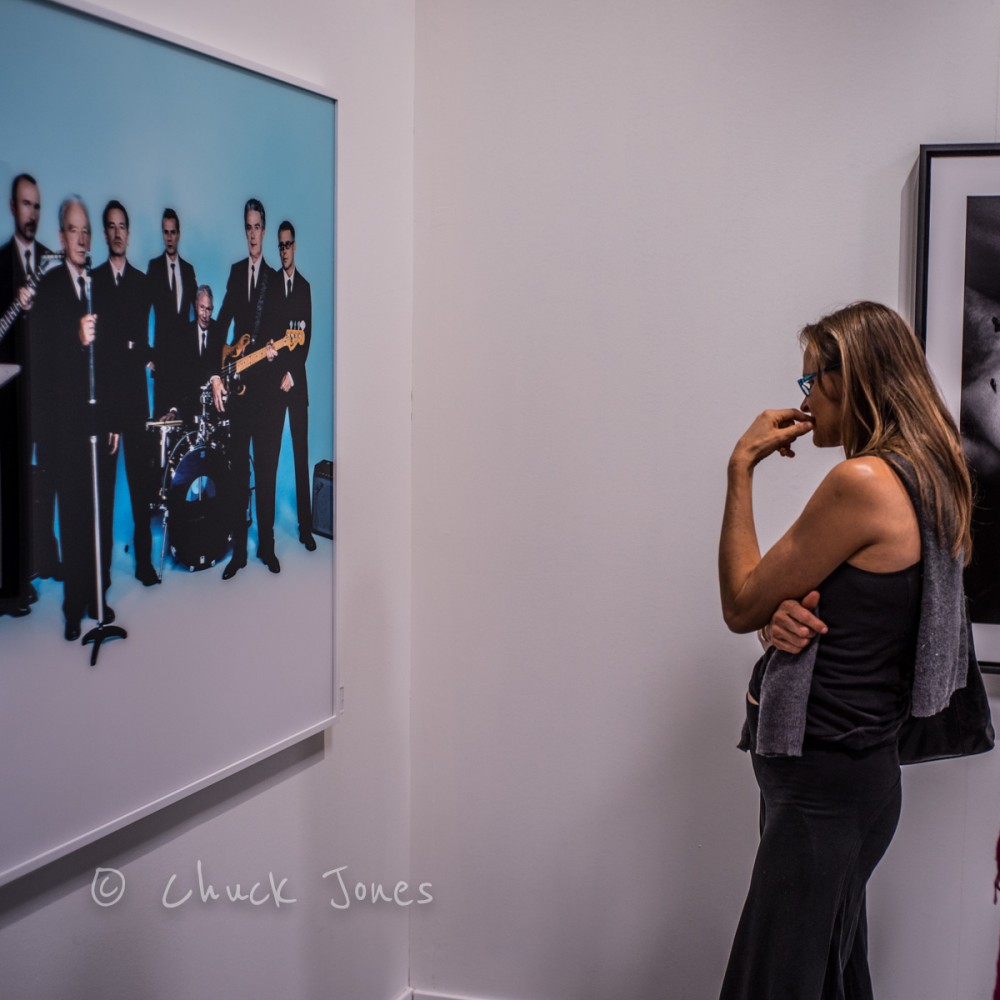 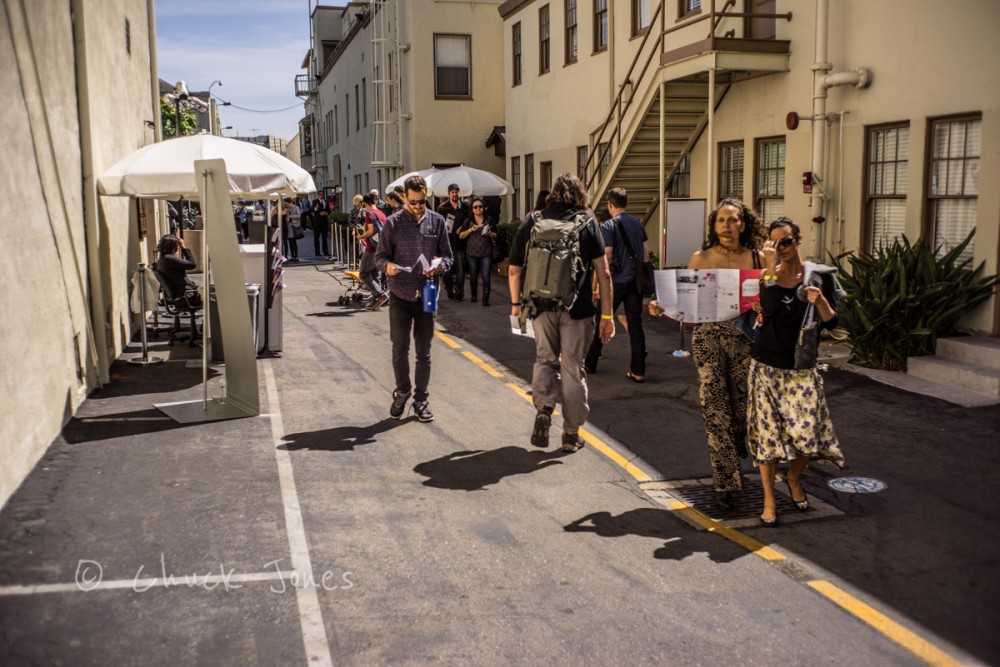 For further information, and to plan your attendance at the Paris edition of Paris Photo, please visit their web site parisphoto.com