There have been a few times in history when Leica introduced products I was very interested in.  To be honest, the introduction of the Leica T intrigued me, but just from reading about it didn’t really ring my chimes.  It looked nice, had nice specs, but wasn’t something I would have ordinarily considered for my own work.  I already own an APS-C size sensor still camera, a Fuji X-E1, and two of the Fuji lenses both of which are very good.  Bottom line, while not exactly a “pocket size” camera, the Fuji is a camera I can grab and go, small bag, two lenses, spare cards and batteries.   More importantly, with it I make very good still photographs. 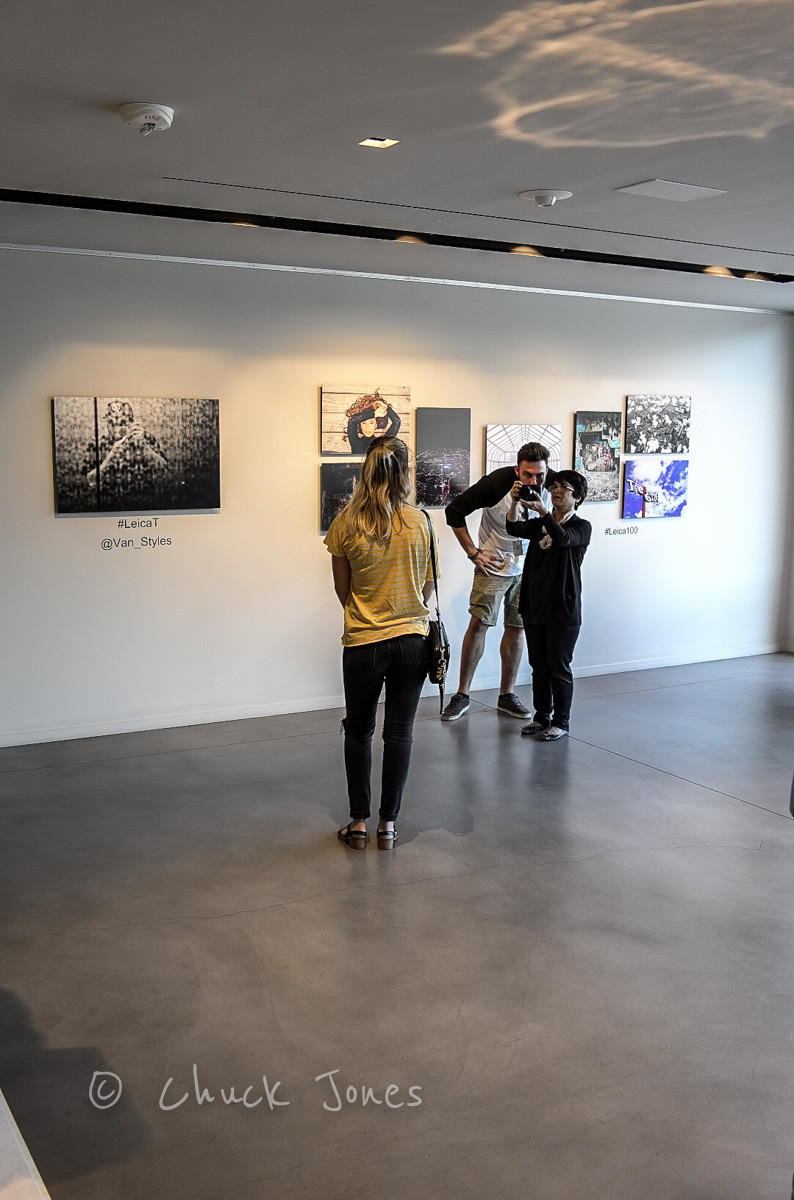 When I walked in for the Leica 100th anniversary party @LeicaStoreLA it was to join in the festivities, with a look at a new no-big-deal camera  Boy, was I ever wrong.  As a journalist I should know better by now than approaching any story with preconceived ideas about how it was going to end, but if I ever needed final proof this is it.  Don’t get me wrong, the 100th party was a fabulous event, held with the kind of style and class Leica events are legendary for.  But this new Leica T System camera is positively amazing.  Amazing for what it isn’t as well as for what it is.  My friend Eberhard Kuehne, Leica’s West coast regional manager was kind enough to go on camera to show me the new Leica T.  (Thanks Ebi!) 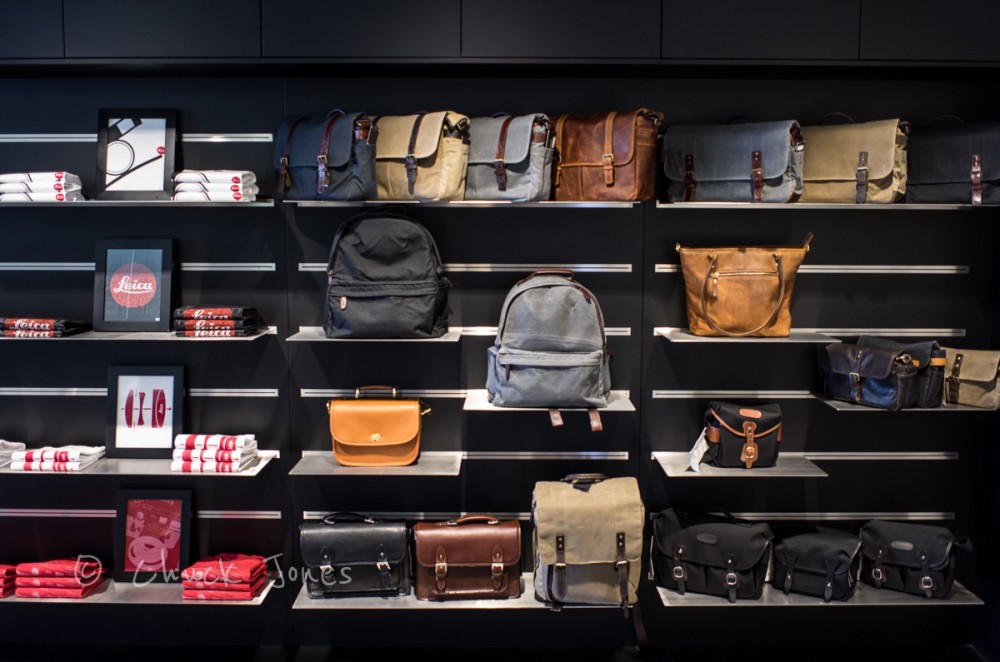 I’ll start my first look review with what it isn’t.  It isn’t a Canon or Nikon or Sony DSLR.  It doesn’t have a mirror.  It isn’t nearly as large or as clumsy.  It is tiny, sleekly compact.  It isn’t heavy.  It weighs just a touch more than my cell phone, so quite comfortable to carry around for the two hours I spent with the Leica T. It isn’t for pixel peepers.  It is only 16MP, and shoots cleanly to ISO 3000, not the highest specs in the market today by any means.  It isn’t for the budget constrained either.  The body alone is $1,850, with lenses around the same cost each. 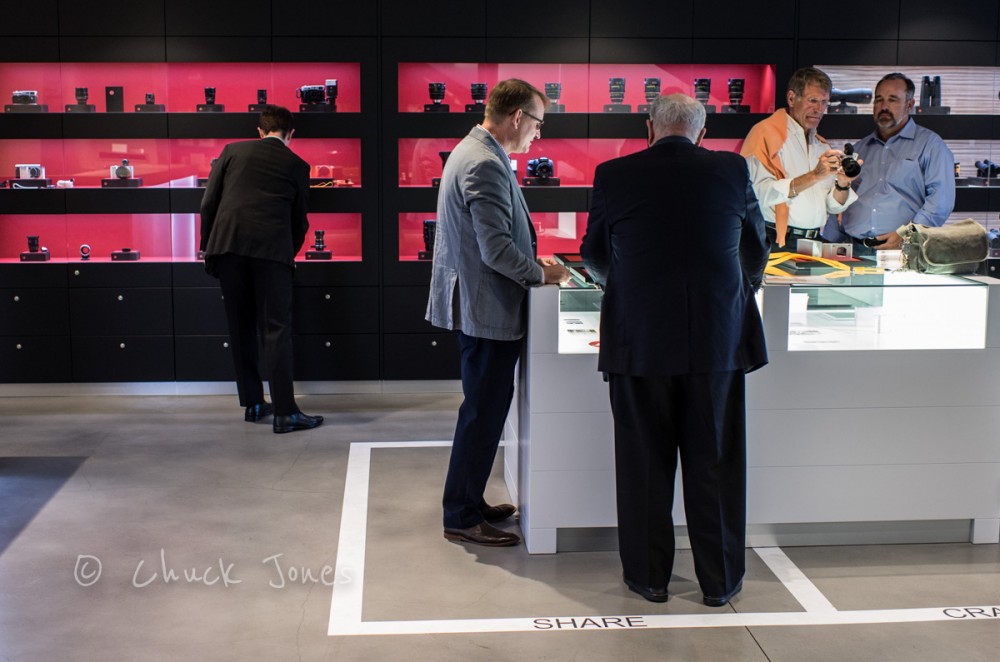 So now for what it is.  It is very nice to hold.  It was perfect.  The fit and finish are taken to a new level for a consumer electronic device.  Apple, eat your heart out – Leica has topped even your excellence of design and product manufacturing.  The Leica T system is something you have to feel for yourself, hold in your own hands, to fully understand.  It is tight, weighs enough but not too much with the 23mm Summicron attached, and feels like a million bucks.  You caress this camera, you don’t simply grip it.  It is a visceral reaction, the feel of craftsmanship despite the strong lightweight aluminum construction.  It has an APS-C size sensor, and best of all, this Leica T likes to help you create photographs. 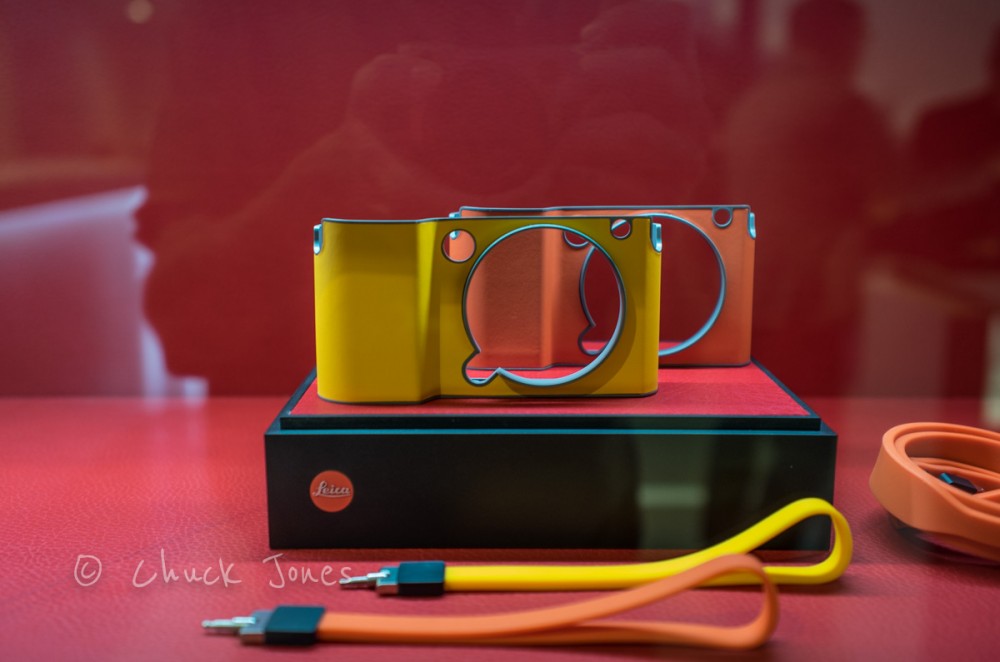 Unquestioningly one of the best user interfaces I have ever experienced with a camera is how I would describe my first experience with it.  Intuitive to a fault – this camera is so easy to use all you need to know is how to turn it on.  It practically does the rest of it for you.  Add the optional VisoFlex viewfinder, and you have the choice of focusing using touch on the large bright rear screen, or the more traditional method of using an EVF.  I found both to be workable, and quite usable.  For some things the rear screen was the preference, especially when I needed to move the autofocus point around.  A simple point-to-focus is all that is required, and magically the area under your finger snaps into focus.  This is a Leica, so quite surprising to see an autofocus camera in the first place.  Quite  a delight to see how well the autofocus is implemented.  There is serious engineering behind every aspect of the Leica T.  It wears its pedigree well. 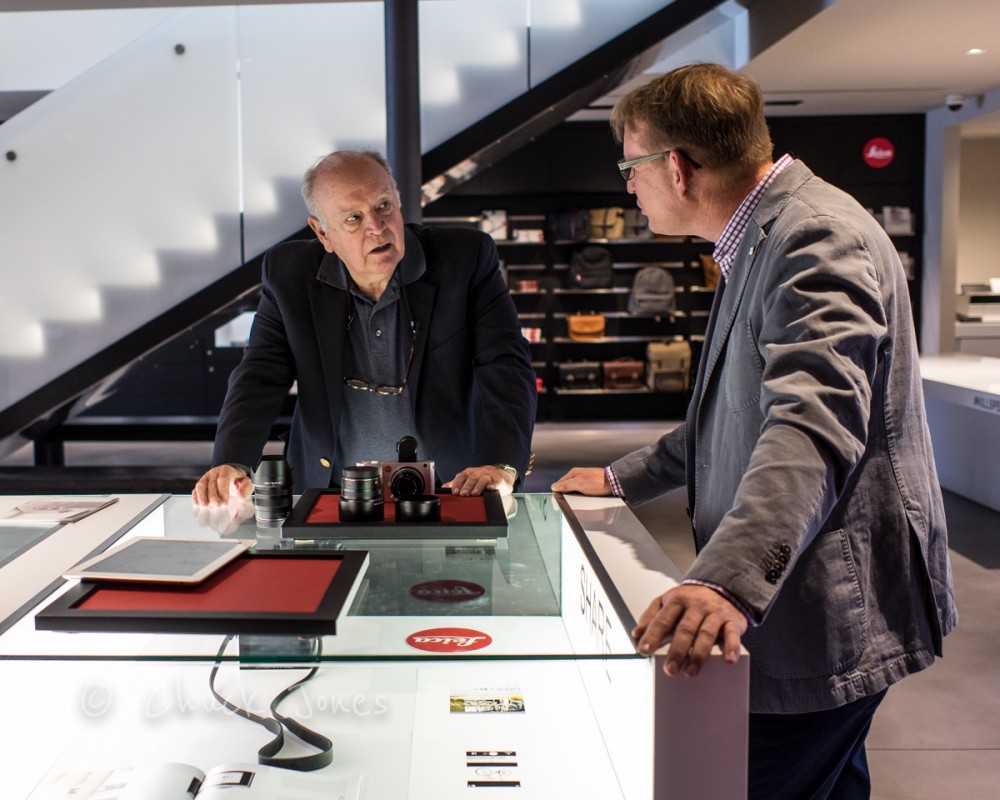 Leica was kind enough to lend me one of the pre-production cameras with my choice of the 23mm Summicron to use for this first look review.  Kindly also was Leica to give permission to use my own SD cards and to show the images created with the pre-production firmware, a testament to how close this camera is to reaching the stores.  I was cautioned the final firmware was not installed so changes could and likely would be made to it right up to the point the cameras started to ship, likely the end of this month. 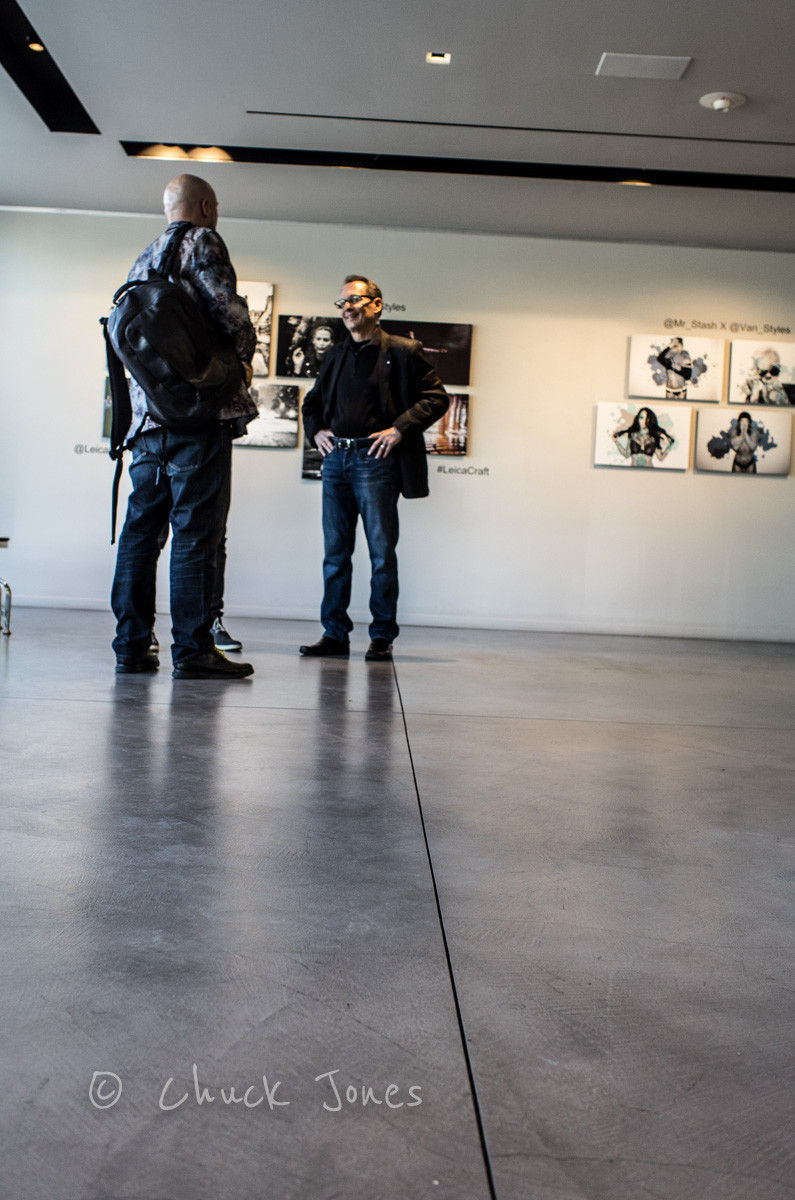 Release one of most any product is always problematic.  Those first owners are very much advanced beta testers for most manufacturers, including Leica in days past.  I lived through the M8 and M9 releases, bit the bullet and kept on but events like that are taken much more seriously by ordinary consumers.  This camera I expect to see work well right out of the gate.  They called the camera I and everyone else at the release were walking around with pre-production versions.  Nobody seemed to be having any operational problems or issues save for finding enough SD cards.  Two solid hours of use on my part with three different camera bodies, I was not able to come up with any issues.  The Leica T systems performed flawlessly. 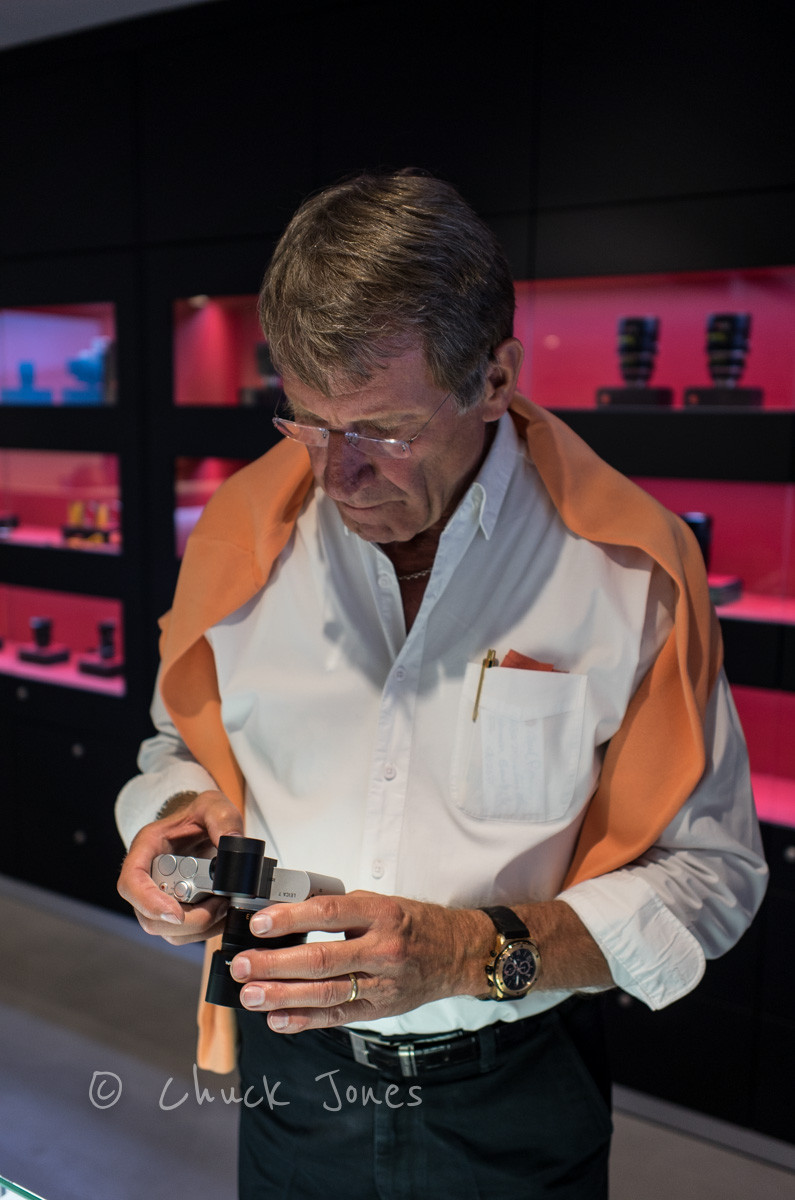 The controls are all driven from the rear touch screen, save for two dials at the top and the shutter release/power/flash up combined control.  Nice touch on the flash, I like being able to raise the flash without removing my eye from the viewfinder when I just want a slight bit of fill.  In fact, I like the placement of all of the necessary controls, shutter speed and aperture on the dials.  Everything else is a touch menu, so it is necessary to interrupt the shooting session to change ISO, for instance.  But the price you pay for such a clean, easy to use system.  Bring up the rear menu, and most everything you are ever going to need is right there available with a finger point.  It doesn’t get any easier.  The “soft key” buttons are large too, not those too tiny to touch things my iPhone suffers with.  Backlight as well for use in low light.  Very well designed, very carefully thought out for use by normal people, not necessarily only professional photographers.  But unlike most consumer interfaces, the Leica T system does not get in your way to creating the best photographs possible.  It assists in creating them, once you realize what is going on and relax into the workflow.  Very nice indeed – a lesson here to everyone else about how to do a user interface impeccably well.

I guess the bottom line for most cameras is the final image quality.  In the end, this is all most people will ever experience from my photography.  Only I will remember the actual photographic experience, those moments I was living as I recorded them to share.  Unlike most cameras, the Leica T makes it easy to do that, so easy that you can still participate in the events, not feel excluded trying to decipher some cryptic, complex menu system.  I won’t try to assess or judge final image quality in this first look, as nobody will be able to buy the firmware that created these.  Suffice it to say, it will only get better from here and these are just fine to my eye!  Judge for yourself.

So, my conclusions.  I want one.  Do I need one?  Possibly, still trying to justify the purchase in my own mind, but having a backup camera body available is always a justification in and of itself.  Having a backup with this good an image quality, shooting side by side with my A7R would be a pleasure.  Given that I own and use daily three Leica M lenses already, it is just a natural progression and an extension of my kit as a hybrid storyteller.  I can certainly tell you that I am looking forward to spending some extended period of time with a Leica T.  Finally, a working man’s Leica.  It’s about time.  The Leica for the rest of us.