Seriously, that’s a lot of money for a 50mm f/1.4 lens. Let’s take a quick price comparison of some common 50mm lenses.

I say all this just to point out that going into this test my thinking was it had better be really good or I’m going to mock it. For those of you who don’t like to read the articles, I’m not mocking it anymore. This lens is really, really good!

This is our usual ‘average of 10 copies, each tested at 4 rotations’ graph. In order to keep the graph sizes reasonably large I’ll do a series of comparisons with the Sony FE 50mm f/1.4 MTF chart on the left, the comparison lens MTF on the right. We’ll start with the one that shut me up, comparing the Sony to the Zeiss 55mm f/1.4 Otus Distagon lens. 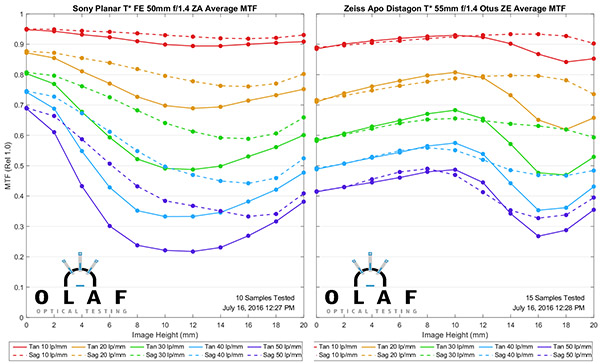 The Sony is phenomenally good in the center; just absolutely superb. From a resolution standpoint it is clearly better than the Otus in the center, and just as good as the Otus away from the center as well. There is a little sag of the Sony’s MTF halfway to the center but then improvement out to the edges.

One note about that ‘halfway sag’ for both of you who actually read the articles and don’t just look at the graphs. This may be an artifact of sensor cover glass. We are limited to a full mm cover glass increments when testing, so for Sony lenses we use 2mm, which is close, but not exactly the same optical thickness as what covers the sensor. (It’s probably about 0.25 thicker). We generally don’t think of a 0.25mm difference as significant for SLRs, but that may not be absolutely true with the short back-focus distance of the FE mount. In other words, the Sony lens may actually be a bit better than what we see here. Or they may not, we aren’t certain yet.

Remember for this comparison the aperture difference is significant. The f/1.4 lens has been tested wide open and that half-stop (Actually 2/3 of a stop. It was late. I was tired.) of aperture makes a lens significantly better. 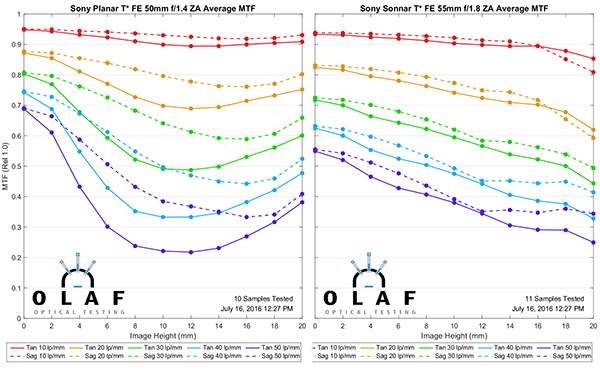 The Sony FE 55mm f/1.8 ZA Sonnar is a really good lens, but even giving up a half stop of aperture, the 50mm f/1.4 is better in the center and generally nearly as good away from center. This is most impressive.

We’ve evened up the apertures now, with two f/1.4 lenses, comparing the Sony to the Sigma 50mm f/1.4 A1 lens. The Sigma is significantly less expensive and in my mind the best ‘bang for the buck’ among 50mm lenses. 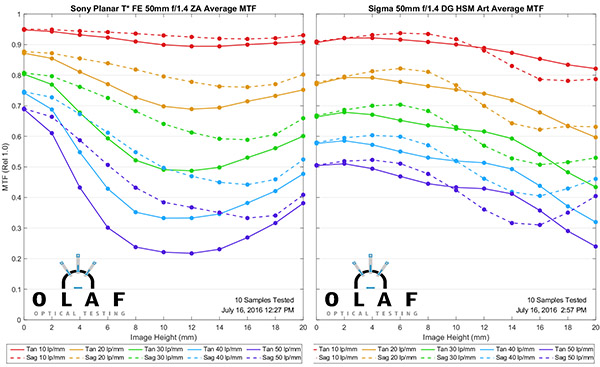 The Sigma is really good, and I won’t argue if the Sony is worth the financial difference. But from an MTF standpoint, the Sony is better.

This is another unfair comparison, the Nikon 50mm f/1.4 G AF-S costs only a fraction of what the Sony does, but I thought it was a good “what you get for your money” comparison. The Nikon is a very nice, decent quality, usable lens. But the Sony is dramatically better, which at the price it should be. 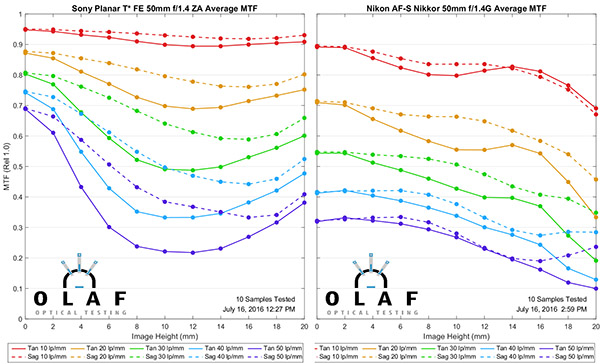 The Sony Planar 50mm f/1.4 is expensive and not everyone needs to plop that much money down for a 50mm lens. But, if you do need one, it’s worth the money; it’s really superb. The center sharpness in particular is unheard of in a 50mm lens. This seems to be a pattern we’re seeing with some of the new Sony lenses, too: The fine resolution (at higher frequencies) is higher than we’re used to seeing.

From a pure value standpoint, the price is reasonable. Best quality prime lenses tend to cost well over $1,000 and some up to $2,000, and this is a best quality prime lens. Your shooting may not require a top-of-the-line 50mm lens and there are lots of other options in that focal length for FE shooters. But if you require the best one, then this would be the one you buy, at least based on bench test results. (Remember, I never suggest buying a lens based solely on test results. Go check out pictures, too.)

You may have been, like I was, impressed with how well the Sony maintained a high MTF away from center. The optical field helps show why, and it is also very impressive.  Both the sagittal and tangential fields are almost perfectly flat from one side to the other. For some photographers that will be more important than absolute sharpness. But for those of you who aren’t aware, a field this flat is really an accomplishment. We rarely see it.

There was a time, early in the history of FE lenses, when I used to wince mentally before I pulled up the Variation graphs for a new lens. That time seems to be past, with excellent results from the more recent Sony lenses. So I was looking forward to seeing how the Planar 50mm f/1.4 lens did.

I have two things to remind you about. First, remember our variation graphs now show only 1 Standard Deviation, rather than 1.5 that we used months ago. Also remember that our bench cuts off about half of the 20mm (edge) readings on Sony FE lenses, so take the extreme edge variation with a grain of salt. I’ve put a 50% gray box over the questionable area to help clarify this.

The first comparison I pulled up was against the Sony 55mm f/1.8 ZA Sonnar, which is one of the better and more popular Sony primes. 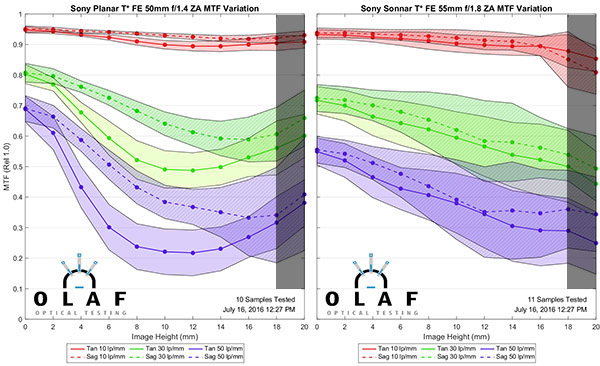 To give you a more general comparison, here is the 50mm ZA Planar matched up against the Sigma 50mm f/1.4 Art lens, another really good 50mm lens with very reasonable sample variation. The variation is very similar; both lenses are quite consistent. (As always, a reminder to please not confuse autofocus accuracy with optical consistency. They have nothing in common.) 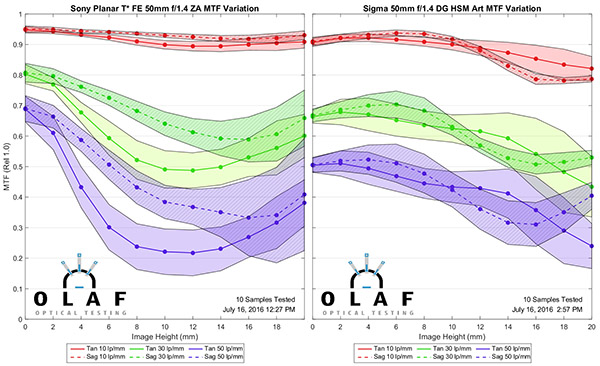 Overall, the Sony FE 50mm f/1.4 Planar has very reasonable sample variation, about what we see in most other high-quality 50mm prime lenses from other manufacturers.

MTF tests like this give you a good idea of how sharp the lens might be and how much sample variation you should expect. On the basis of these, the Sony 50mm f/1.4 Planar is as good as anything available. For those of you who need a really high-quality 50mm lens on an FE mount camera, it looks like your best choice.

The very flat field with almost no curvature is another plus, and one that may appeal to photographers every bit as much as the excellent MTF does.

But of course the proof is in the pictures. We’re starting to see some sample images online and that will explode shortly, giving you a chance to evaluate the bokeh and the lens’ performance in various lighting conditions. But unless those greatly surprise me, I think a lot of people are going to love this lens.