Micro Drone 3.0: Aerial Video in the Palm of Your Hand

Micro Drone 3.0: Aerial Video in the Palm of Your Hand

It’s small, smart, streams HD footage to your phone, and that’s just the beginning of Micro Drone 3.0.  I’ve been an avid follower of the “drone revolution” pretty much since its inception.  In this relatively short period of time, the changes to the drone technology have taken place almost as rapidly as the users provided feedback to the designers.  I’m talking about several generations of technology all coming in rapid succession.  There is just no getting around it, drones are not only popular, they are here to stay.  Inherent privacy, safety problems and all.

Published on Jan 11, 2015, In this episode, the Roswell Flight Test Crew speaks with Vernon Kerswell of multirotor manufacturer Extreme Fliers (www.extremefliers.co.uk), based in the United Kingdom, at the 2015 Consumer Electronics Show (CES). At the show, Extreme Fliers unveiled their new Micro Drone 3.0, a miniature quadcopter with a range of innovative features and accessories, including a tiny First-Person View (FPV) system capable of streaming live video to a smart phone. Other features include the world’s smallest camera gimbal, interchangeable parts to allow the end user to easily re-configure the aircraft, and an innovative accessory mounting system that employs permanent magnets. The company at that time announced their plans to release the new model this summer, with support provided through a Kickstarter campaign.
Wind time forward seven months, and that proposed Kickstarter campaign is an Indiegogo.com reality RIGHT NOW! 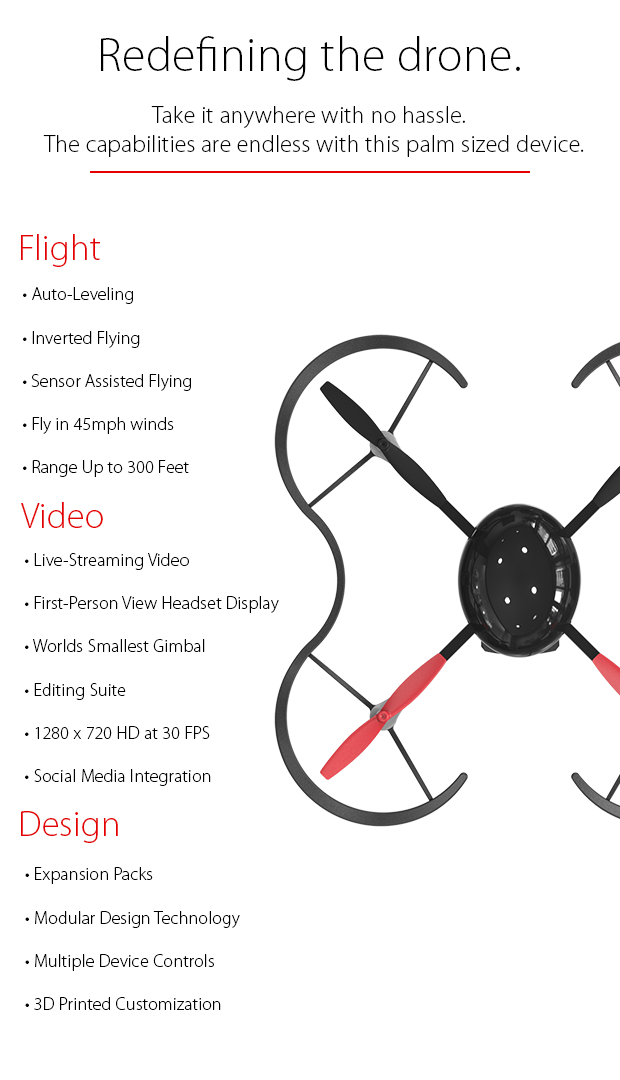 Magnetic attachments for optional equipment means no messy or heavy wires to worry about.  Reconfiguration is as simple as changing your mind.  And since the following stretch goals have already been reached, the following accessories will be available at launch, including the world’s smallest gimbal!

Want one of your own?  So did I.  And so have 15,994 people in only one month, and there are still twelve days to go!  At only $99 USD, how can you really go wrong for a flying 720P video platform?
$1,784,699 USD has been raised, far exceeding the original $75,000 goal, and that is just as of the date of this post!
Back this project and get a Micro Drone 3.0 of your very own here: Micro Drone 3.0 Campaign
Like this story?  Please rate it, and share it with your friends!  [ratings]
0
0
Christopher Nolan consumer electronics Consumer Electronics Show end user Extreme Fliers indiegogo Interchangeable parts Lauren Reed Magnet Micro Drone 3.0 Roswell Flight Test Crew Syncopy Films time United Kingdom Vernon Kerswell