The Panasonic HX-A500 4K Action Cam is just the latest in what is becoming a long line of mirrorless camera magic from Panasonic.  Panasonic has been on a tear making great strides in mobile video cameras in recent years.  The Panasonic Lumix DMC-GH2 was probably the first hybrid digital camera with HD video recording capability, and is a part of the Micro Four Thirds System. Though commonly referred to as a DSLR style or type of camera, the GH2 had no mirror or optical viewfinder.  Instead, the GH2 had both a fold-out LCD screen and an electronic viewfinder, making it one of the earliest “mirrorless” hybrid cameras capable of producing serious quality work.

Moving forward to The Panasonic Lumix DMC-GH3, it is the successor to the Panasonic Lumix DMC-GH2 and was announced in September 2012 at Photokina in Germany. I got mine in  November, 2012, when the first shipments reached USA shores.  It is the first MILC (Mirrorless Interchangeable Lens Camera) that can record videos with a bit rate of up to 72 megabits per second. That is significantly higher than the specification of AVCHD 2.0 of up to 28 megabits per second, which was released in July, 2011, and is used for similar cameras and camcorders.  The GH3 quickly became a workhorse for small format video production.

The successor of Panasonic GH3 is the Panasonic GH4 with capability to take 4K video and with a MSRP of $1,700.  Though reasonably priced,  the optional professional quality external video/audio IO unit cost an additional $2,000.  We are waiting for the first releases of the production versions of the GH4 now, but there are many who have posted video samples and indeed full camera reviews based upon prototype cameras.  Panasonic has done quite a thorough job of vetting both the ergonomics as well as the 4k Panasonic backed pedigree for having professional quality video from a hand-held camera system.

So what does all of this have to do with the just announced Panasonic HX-A500 4K Action Cam?  After a long series of “Hits” it looks like this time Panasonic may have blown it.  Designed and priced to compete with the GoPro Action Cam, the Panasonic is capable of shooting up to 4K video.  But unlike the cute little waterproof GoPro, the Panasonic splits the camera/recorder functions into two parts, connected by a rather short or rather long wire, depending upon your particular use.  What was Panasonic thinking when they came up with this packaging?  Can you spell U-G-U-L-Y?  It can.  How about H-E-A-V-Y?  Don’t we all want a Star Wars era communication pod hanging off the side of our face? 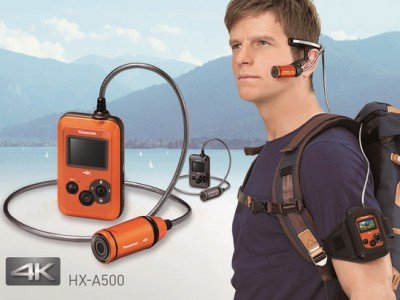 I mean seriously, we have the VuZix: Vuzix to Compete with Google in Glass Style Wearable Cameras

And of course, the original Google Glass:

The Original Google Glass – Side View

There Is Even A Good Looking Version For Swimmers

And finally the most up to date and modern versions of Glass: So, where does Panasonic get off bringing something as ugly, pedestrian, utilitarian, and down right UGLY as this cumbersome to wear thing to market in 2014? 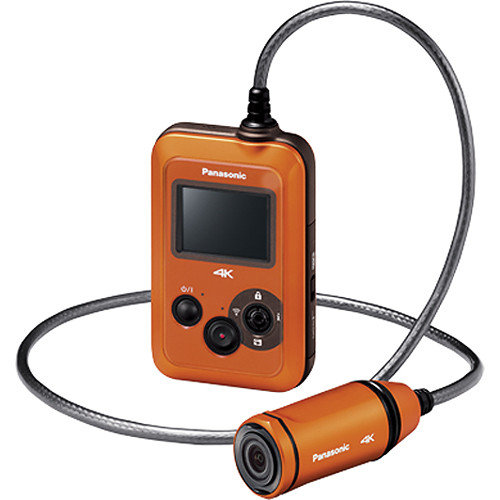 Bottom line, the quality of the electronics is still unknown, as it has not shipped yet.  But with packaging such as this, many are saying what does it matter?  Nobody is going to be wearing this ugly thing anyway!  I predict a total FAIL for this product.  If the packaging doesn’t get you, trying to figure out how to attach the two pieces will.  Sorry guys, this is not one of your 4K products I will be using. I highly doubt many will and certainly not nearly as many as will be using the new GH4.