Introduction Of The Sony A7S from TheCameraForum on Vimeo.

The world premier of the Sony A7S introduced on Sunday, April 6, 2014, at the NAB 2014 Show In Las Vegas by Mr. Shigeki Ishizuka, Sony Executive Vice President.

I had planned to attend the NAB convention in Las Vegas, but I had not anticipated being there for the world premier of the Sony A7S introduced on Sunday, April 6, 2014 by Mr. Shigeki Ishizuka.  I got the invitation for the event and, driving like a mad man, got to Las Vegas in time for the “big show.”   Shigeki Ishizuka serves as Sony corporate Senior Vice President and President of Device Solutions Business Group, Consumer, Professional & Devices Group at Sony Corporation. Shigeki Ishizuka has been Corporate Executive and President of Digital Imaging Business Group since April 1, 2012. Shigeki Ishizuka served as a Director of Sony Chemical & Information Device Corporation.  Having the top Sony division executive make the Sony A7S introduction underscores how important this introduction is for Sony, and bodes well for more innovative product introductions soon to follow. 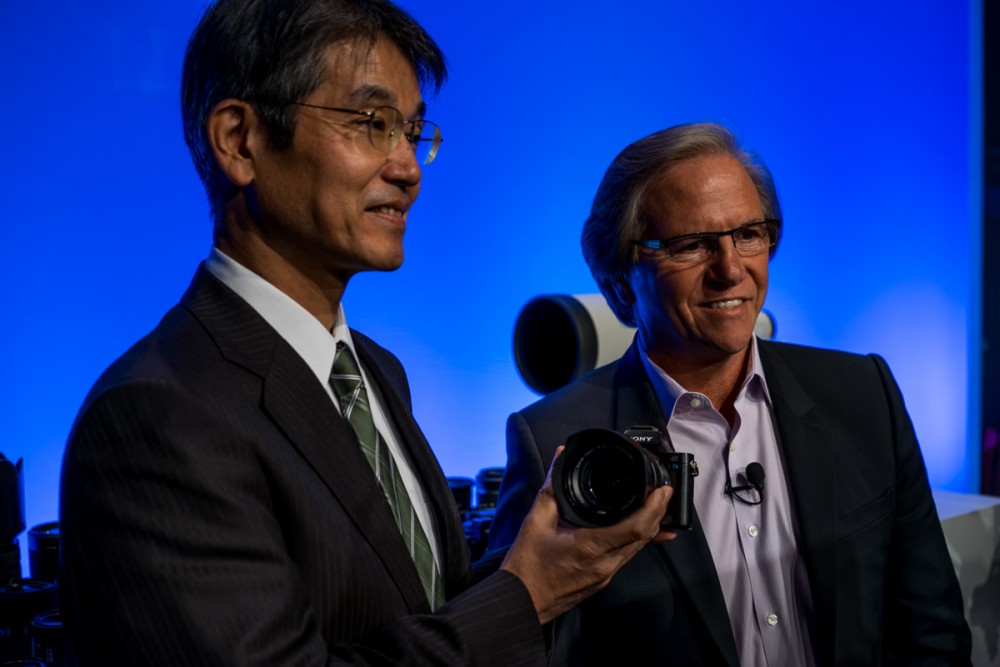 But enough about the presenter, now for the available details about the presentee.  The Sony A7S is the latest in Sony’s full frame mirrorless small camera bodies.  The “S” in this case stands for sensitivity.  And sensitive it is indeed!  While the cameras on display at NAB are early prototypes, they are operational.  Sony had some quite good footage running in their booth showing how nice the A7S was at low light, high ISO.  At 12MP, Sony has some precedent they are following.  The original Canon 1Ds was a 12MP camera that shattered industry expectations, as it was the first full frame 35mm equivalent body from Canon.  It looks like the A7S may be following in those same ground breaking steps, only better.  The old 1Ds was usable but noisy at ISO 400.  The A7S looks to be usable at over ISO 15,000!

At the request of Sony, Den Lennie recently had the opportunity to fly to Japan and shoot a demo reel with an early pre production Sony Alpha 7s. The above video is what he did with it. In his own words, “I was keen that we put it into challenging environments and high contrast and low light situations.”

Full details of the shoot can be found on his blog: http://www.fstopacademy.com/blog/sony-alpha-7s-first-hands-on-shooting-review/

Den Lennie made this short BTS film to help you understand what he did shooting the video, did and why.

The day of the product announcement, I also had the rare privilege of shooting the A7S with its pre-production firmware V0.01.  That’s very early, so all of my first impressions and the images I shot can not be relied upon as anything more than representative of what this camera in production trim will actually do.  Almost everything about the A7S will be improved before its estimated ship date of this summer.  I shot only early JPG’s, as no RAW converter yet supports the A7S 12MP .  I can not in fairness post the JPG’s, as they are not representative of what the final production camera will perform like, but I can tell you something about them and the other early samples I saw at the Sony booth.

Fantastic dynamic range was the first thing that jumped out at me.  Discussing the dynamic range with El Deane Naude, Senior Marketing Manager for Sony Electronics, Inc. it was confirmed what my eyes were seeing, an estimated 12-13 stops+ of dynamic range, even shooting at ISO 1600! Amazing high ISO detail, especially in the shadows, with no evidence of noise.  The specs for this camera claim it can reliably shoot in -4EV lighting conditions. That is about 1/4 of the light one candle puts out.  Amazing.  The lighting on the show floor wasn’t that low, but the A7S did not have any problems locking focus in the low light conditions my A7R was struggling with.  Looking at my examples, I will probably have to agree, this is going to be one WICKED low light camera for both still photographers and videographers alike.  Hybrid Storytellers, jump with joy, Sony finally built a camera for us and I am sure impressed.

What makes it so good?  The new 12MP image sensor.  By bucking the megapixel race, and building the sensor used in the A7S particularly for its intended purpose, Sony has the ability to avoid many of the problems similar cameras experience.  By going with only 12MP on a full frame chip, each of the pixels are much larger, allowing for the collection of far more light “signal” without raising the background noise.  This means an overall sensitivity that is greatly enhanced and at the same time provides an excellent wide dynamic range.  Smart move, Sony.

The new model is also the world’s first camera to utilize the entire width of a full-frame image sensor in 4K video acquisition, and does this without cropping or line skipping or pixel “Binning” as other competitors sensors do.  As it can read and process data from every one of the sensor’s pixels, this allows 4K video shooters to utilize all of the artistic and creative benefits provided by the unique sensor.  This also means for the A7S at least, aliasing free video and an absence of rolling shutter, as the image is read out from the full frame at the actual output dimensions.

“The α7S gives Sony the most complete, versatile lineup of full-frame cameras in market today,” said Neal Manowitz, director of the interchangeable lens camera business at Sony Electronics.  “Between the α99, VG900, RX1, α7, α7R and now α7S models, we have completely revolutionized what it means to be a ‘full-frame’ camera, bringing a new level of quality and portability to enthusiast photographers and videographers.”

This camera makes my mouth positively water!  The A7S could well prove to be a game changer for my and many other photographers’ work.  I can’t wait until I get to use one for a more extended time.  Many thanks to Sony for allowing me to try the new A7S camera for this story, and particularly to El-Deane Nuade for his excellent assistance showing me this exciting new camera!

My friends Frederick Van Johnson, El-Deane Nuade sit down for a chat about the A7S shortly after the press conference introducing it.

Here are the specs:

*1 Configuration method/Access method: WPS or manually/infrastructure mode. When connecting to smartphones, the camera can always work as a base without a wireless access point. (Security: WEP/WPA-PSK/WPA2-PSK)

*2 Indicated recording time is defined by repeating the following cycle: Power on, start recording, zoom, stand-by and power off.

*3 Indicated recording time is defined by repeating the following cycle: Pressing the MOVIE button. No other operations such as zoom are performed.