NAB 2014: DJI from TheCameraForum on Vimeo.

When I started writing this series for TheCameraForum.Com a year and a half or so ago, DJI was just ramping up.  I never expected to have a special category of camera for DJI Quadcopters.  But here we are only eighteen months later with that new category.  The whole “drone” quadcopter, or unmanned aerial vehicle field has positively exploded.  Many for fun, but also many are now looking into the commercial possibilities of using these vehicles for many more purposes.  One of these uses is as a replacement for expensive and difficult to setup/operate camera jibs.

Camera JIB in the down position.    Source:Wikipedia

In cinematography, a jib is a boom device with a camera on one end, and a counterweight and camera controls on the other. It operates like a see-saw, but with the balance point located close to the counterweight, so that the camera end of the arm can move through an extended arc. A jib permits the camera to be moved vertically, horizontally, or a combination of the two. A jib is often mounted on a tripod or similar support.  A jib is useful for getting high shots, or shots which need to move a great distance horizontally or vertically, without the expense and safety issues of putting a camera operator on a crane for a crane shot or laying track for a camera dolly. A jib can even be mounted on a dolly for shots in which the camera moves over obstacles such as furniture, when a normal dolly shot could not be used.

Operating a camera jib from the low position. Source: Wikipedia

A jib is somewhat more complicated than a simple lever, since almost always the camera’s aim needs to be controlled independently of the swing of the jib arm. This can be done by relatively simple mechanical means or by the use of remotely controlled electric servo motors.  Since the camera operator is often not able to use the camera’s controls directly or look through the camera’s viewfinder, a jib is often used in conjunction with a remote camera control for focus and zoom and with a portable video monitor.  A device known as a “hot head” or “remote head” is attached to the camera end of larger jibs. It supports the camera and enables remote pan/tilt functions with focus/zoom control. This setup can be operated by one person, or the circumstance may require two operators. In a two-operator situation, one person operates the jib arm/boom while another operates the pan/tilt/zoom functions of the remote head.

All of this is quite complicated, and not real easy to learn how to do well.  It takes hours of practice to smooth out your moves, and some considerable strength to move the heavy apparatus around, transport it to your location from the rental house, and setup/teardown.  There were not any other good options for doing jib shots until recently.  Short of renting an expensive helicopter, these kinds of shots always required advanced planning and specialized operators.

The Phantom 2 Vision+ is designed for aerial cinematography with its DJI in house created camera and integrated incredibly stable 3-axis gimbal.  If this description sounds like DJI is making professional imaging tools easily accessible to everyone, you understood correctly.  That is exactly the mission of this driven company.  Bring professional grade cinema creation tools to as many independent filmmakers as possible and  at a price point that makes sense for their limited budgets.  DJI makes other models of quadcopters for those just wanting to fly.  This model is specifically designed and targeted at those of us who make films.

It is not like any other camera you have ever used.  But make no mistake, it is a camera like every other camera a filmmaker uses to achieve his overall goals.  The difference is this camera does not require expensive jibs to do the usual jib moves.  You fly them as opposed to attaching camera to jib, setup jib, tear down jib, transport the sucker back to the rental house, etc. etc. etc.  Which sounds easier?  Learning to fly, or learning to schlep heavy gear and rig camera jibs?

I admit it.  I got hooked on flying things as a kid, but back then they all smelled awful, spit noxious fumes of burnt kerosene, and were attached by two short pieces of nylon fishing line to a plastic handle. I laid it out on the tarmac or dirt field about fifteen feet in front of me, with the tether held in my right hand.  A friend was required to start the gas engine by flipping the propeller to start, removing the battery clip from the “glo plug”  and releasing the plane in the air once I had taken up the slack.  It wasn’t efficient, it took some time and effort to learn the skills to fly, two people were required, and you only “flew” a thirty foot radius in endless circles.  Round and round and round I went.  But it was fun!  Things are much different now.

The difference today with all of the quadcopters and those old tethered styrofoam flying buzz bombs is like the difference between night and day.  They are related, but for the most part two entirely different things.  DJI has designed the Phantom 2 Vision+ not as a flying machine, but as a flying camera.  In other words, you may enjoy flying a quadcopter and that is great, but this one is a camera.  A camera with “moves” of its own.  Thanks to modern technology and micro-electronic control circuitry, this camera flies itself, you just provide the direction and control over how and when it moves.  And, of course, either you or a friend runs the camera.  Very cool.

Those long setup times for a jib, renting and transporting the things, the need for a jib camera operator and assistants – all gone.  Not necessary.  Wow.  And another wow at what you can do for the footage!  The only limitation is you can not use the live sound.  These jib moves are strictly intended for overdub with a soundtrack, as the propeller and motor sounds from the copter far overpower all background and foreground sound.  Think in terms of mixing frozen margaritas in your blender kind of buzzing, and you’d be close to the picture.  No papers lying about either, as the downdraft from the propellers is a serious amount of wind!  More than enough to send a desk full of papers flying about the room.

The S1000 has been specially designed by DJI for high level professional aerial photography and cinematography. Think of it as your flying jib for larger cameras, say a Canon 5D Mark III size.  It comes with retractable landing gear, as well as folding frame arms and propellers to minimize storage space. For how large they are fully extended and ready for flight, the S1000 folds up into a remarkably small package.  Ingenious.  And fly this puppy does too.  Like its smaller sibling the Phantom, this whirly bird sounds like a vacuum cleaner gone bizarre.  It blows a ton of air and sound like the serious machine it is.  Lifting heavy camera bodies and lenses is hard work for something as small as this.  Doing it reliably enough to trust a ten thousand dollar+ camera payload is something I would only trust to an octocopter as well designed and proven as the DJI Spread Wings S1000.  Once you see it for yourself, you believe in its capabilities.  This is a very serious camera platform built by people who know flying platforms.  No wonder they are the leading company in the industry.  They deserve to be, form what I observed at their NAB 2014 booth and demonstration. 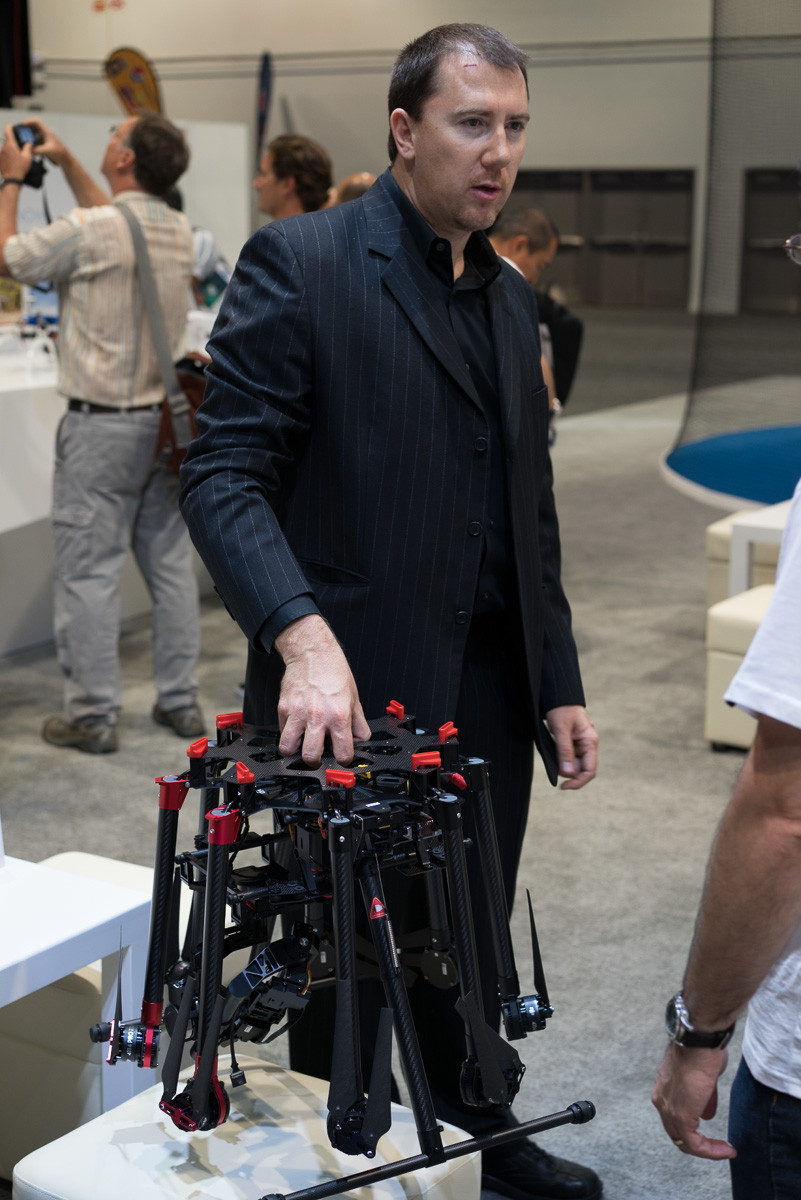 Price S1000 OCTOCOPER READY TO FLY COMPLETE PRODUCTION PACKAGE $11,080 USD.
Fancy flying cameras not you bag?  Can’t resist the urge to fly, but only have fifty bucks to spend? How about trying out the Lilliputian sized Revell?

But in any case, PLEASE RATE THIS STORY!  [ratings]