The Canon EOS 5D Mark III is a professional full-frame digital single-lens reflex (DSLR) camera. It has a 22.3 megapixel CMOS image sensor.  Succeeding the EOS 5D Mark II, it was announced on 2 March 2012, the 25th anniversary of the announcement of the first camera in the EOS line, the EOS 650. It was also Canon’s 75th anniversary. The Mark III went on sale later in March with a retail price of $3499 in the US, £2999 in the UK, and €3569 in the Eurozone.  As of this writing, the venerable workhorse of the video production industry is nearly three years old.  Speculation abounds on how long Canon can afford to wait for the now long overdue sensor upgrade for the 5D, with many expecting Canon’s response at Photokina later this month.

The question on everybody’s lips here in Hollywood in the Sony A7S vs Canon 5D III debate is can the Canon DSLR keep up with Sony’s new mirrorless lowlight powerhouse, even with a major sensor refresh?  Does Canon have the technology to compete, or has Sony simply out distanced the other sensor manufacturers?  There are a serious number of digital cameras made today that use Sony sensors, but are branded something else on the outside.  Phase One, Nikon, Panasonic, Olympus, Hasselblad, Pentax, and Sony themselves all use Sony sensor technology in their photographic products.

Sony has set their sights on becoming a serious contender in the DSLR Branded market, and they are well on their way to achieving that status. Sony’s range of DSLR size products, while good, have not captured the photography marketplace nearly as quickly as the amazing A7 series of cameras that lead the recent “mirrorless madness” revolution. From the compact sized, full featured 36MP A7R to the 24MP A7 to the 12MP A7S, each of the cameras are specialized for a particular market segment and aggressively priced against equal and often inferior competing technology. In other words, more camera for less money.  More technology for a lower price.  The incredible feature set of the A7S speaks to that with included professional grade features such as X-AVC recording format and S-log2 profile capability for improved dynamic range.  These two capabilities alone were a $13,000 upgrade option for Sony’s line of professional studio cameras just a couple of years ago.

“As well as the widespread applications for the professional HDTV market, Sony has developed the XAVC format to enable the expansion of 4K content into the consumer market. XAVC is designed to provide a future proof codec that can meet customers’ rapidly developing requirements for 4K content production and HD120P high frame rate shooting.”

“The quality of HDTV program originated in 4K is simply stunning and will allow both broadcaster and production communities to build right now a future proof catalogue of high-end content.”

Built with the principles of workflow efficiency, evolution and optimized image quality at its heart, Sony’s XAVC can support the following content formats:
XAVC has been developed as an open format, providing a license program for other manufacturers in the broadcast and production industry to develop their own high quality and high frame rate products. According to Sony Europe, the following forty leading manufacturers’ products plan on their support for Sony XAVC format and workflow: 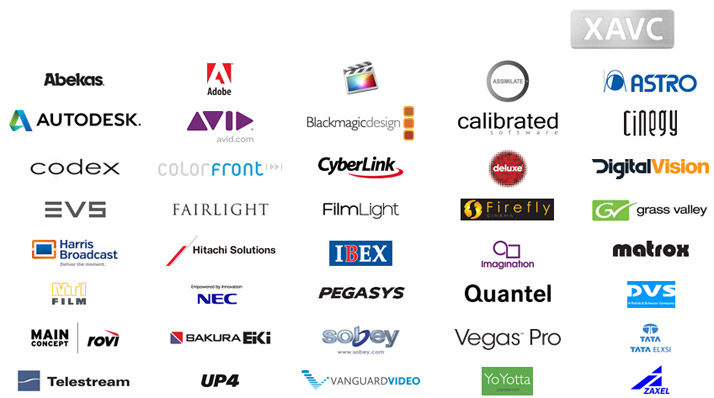 The Canon 5D series cameras have been a favorite for videographers craving the full frame sensor look for several years. As my regular readers already know, until about a week ago, I owned one of them myself.  As good as it is as a still camera, the Canon does have a few serious flaws for video.  It has been over a generation now since Canon has made any substantial changes in the formulation of the 5D.  Canon failed to make any generous improvements in video quality from the 5D2 to the 5D3 leaving the door wide open for competition. In today’s fast paced technological developments, what is essentially a five year old electronic design just is not capable of matching up with recent digital camera improvements.

While others have come close, it looks to me like Sony has found the perfect recipe in the new A7S to finally make itself the camera of choice for videographers.  I am one of them.  From my own testing, I agree with most of the points Dan Watson presents in his video.  The Sony A7S is the finest video camera I have ever owned, and certainly one of the finest handful of still cameras to boot.  I am continually impressed by how good the A7S performs in low light.  How do I beat a combination like that?  Not with a Canon 5D.